World Rabies Day 2022: It is observed on September 28 to spread awareness about rabies prevention and focus on defeating this horrifying disease. Let us have a look at the current theme of 2022, its history, and its significance.

World Rabies Day 2022: The COVID-19 pandemic has raised several doubts and misconceptions regarding diseases, their spread, and in general vaccination. But for rabies, this is not new because fears, misconceptions, and misinformation related to the disease date back hundreds of years and so this year's theme is focused on sharing about rabies and not spreading fear about the disease.

World Rabies Day is observed on September 28 to spread awareness about rabies and to bring together to enhance prevention and control efforts across the world. It is celebrated in several countries including the United States. 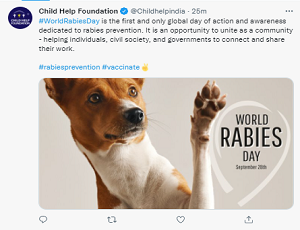 It is a disease that is transmitted from animals to humans and is also known as a zoonotic disease. It is caused by the rabies virus, of the Lyssavirus genus, within the family Rhabdoviridae. The most common reservoir of the virus is the domestic dog with more than 99% of human deaths caused by dog-mediated rabies.

The theme for World Rabies Day 2022 is “One Health, Zero Deaths”.

The theme for World Rabies Day 2021 was “Rabies: Facts, not Fear”. It was focused on debugging the myths related to Rabies, the importance of dog vaccination and post-exposure prophylaxis, and the need for a united effort toward achieving the elimination of this transboundary disease.

September 28 marks the anniversary of Louis Pasteur's death, the French chemist and microbiologist, who developed the first rabies vaccine. In 2007, the first World Rabies Day (ERD) was organized by the two founding partners namely Alliance for Rabies Control (ARC) and the Centre for Disease Control and Prevention, Atlanta (CDC).

In the United States, animals that transmit rabies are bats, foxes, raccoons, and skunks. In some developing countries of Africa and Southeast Asia, stray dogs are the most likely to spread rabies to people. If a person is showing signs and symptoms of rabies, the disease nearly always causes death. Therefore, a person who is at risk of contracting rabies should take rabies vaccinations for protection. The first symptoms of rabies may be similar to flu and may last for a few days.

Therefore, it is necessary to take immediate medical care if you are beaten by any animal or exposed to an animal suspected of having rabies.

How is rabies caused?

It is caused by the rabies virus and is spread via the saliva of infected animals. The infected animal can spread the virus by biting another animal or a person. in certain rare cases, rabies can spread when infected saliva gets into an open wound or the mucous membranes like the mouth or eyes. This can occur if an infected animal were to lick at an open cut on your skin.

Some of the animals that can transmit the rabies virus are:

Important Days and Dates in September 2021