Yuvraj Singh Biography: Yuvraj Singh is remembered for his performance in the 2011 Cricket World Cup. He has many records under his name and is the only player to score 6 sixes in the T-20 Cricket World Cup. On October 17, 2021, he was arrested and then released on bail in connection with an alleged casteist remarks case. Let us have a look at his life through this article.

Yuvraj Singh was arrested and then released on bail on October 17, 2021, in connection with an alleged casteist remarks case. He earlier apologised for his unintentional remarks in an Instagram live video against cricketer Yuzvendra Chahal and said that he was misunderstood.

In his Instagram live video in June 2020 with cricketer Rohit Sharma, Yuvraj Singh commented on cricketer Yuzvendra Chahal over his TikTok videos which triggered outrage over social media. Through this article, let us have a look at the life of the former cricketer.

Sachin Tendulkar and Yuvraj Singh are the only two Indians who have won the ‘Man of the Series award in the cricket World Cups so far.

Yuvraj Singh was conferred with the Arjuna Award (India's second-highest sporting award) in 2012. He was awarded the Padma Shri, India's fourth-highest civilian honour in 2014.

At the 2014 IPL auction Royal Challengers Bangalore bought Yuvraj for an all-time high price of Rs 14 crore and, in 2015, the Delhi Daredevils bought him for Rs 16 crore making him the most expensive player ever to be sold in the IPL history.

Yuvraj Singh was a good batsman of the Indian middle order. He had scored 8701 runs at an average of 36 along with 14 centuries in the one-day international matches. 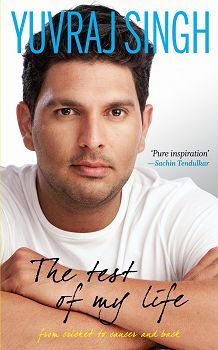 The book “The Test of My Life: From Cricket to Cancer and Back” is an autobiography of Yuvraj Singh. Released on 19th March 2013. The starting price of this book was a bit high Rs. 5000 but now it is available in 480 Indian rupees.

So this was the complete overview of the cricket records of the Yuvraj Singh. Yuvraj was a complete middle-order batsman who played a very crucial role in India’s victory in the cricket world cup 2011.