‘Why did Katappa Kill Baahubali?’ If you are still gripped by this million dollar question, worry not, you are not alone. Millions are still wondering about this question and are hoping to find the right answer this Friday when Baahubali 2 hits the theatres.

‘Why did Katappa Kill Baahubali?’ If you are still gripped by this million dollar question, worry not, you are not alone. Millions are still wondering about this question and are hoping to find the right answer this Friday when Baahubali 2 hits the theatres. The Baahubali fever is so intense that it has gripped the entire nation with thousands lining up outside cinema halls to get Baahubali 2 tickets.

But, if you are one of the less fortunate ones, who haven’t got a ticket or can’t wait to find out the answer, we would let an MBA student explain the same. MBA’s or management graduates to be specific are known to be problem solvers; people who have answers to all the questions hidden somewhere in their PPTs.

So when the magnum opus of Baahubali left thousands in a lurch, our MBA experts rose to the occasion to give us probable answers while terming the film educational. Yes, you read it right, MBA’s think Baahubali is an education film from which MBA aspirants can learn a lot. MBA’s are known for their business jargons and how could they analyse a phenomenon of this magnitude without creating one dedicated to Baahubali. They are terming it as a perfect mix of edutainment which has in store great learning from ‘Strategic Management’ and ‘People Management’ point of view. 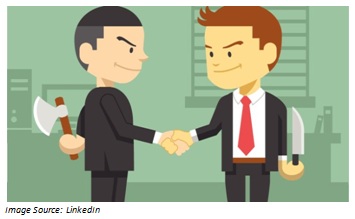 The movie throws light upon the tantras & mantras implemented in the competitive corporate environment to gain a larger market share and eat out on the share of competitor. Let us read some interesting Management Lessons that we got to learn from Bahubali. Some of the key MBA lessons that an aspirant can derive from S. S. Rajamouli’s beautiful creation are listed below:

In the movie, there arrives a situation when the king has to ascend the throne by winning the war. The competition is between Bahubali and Bhalladeva to kill Kalakeya. During the war, strategy used by Bhalladeva portrayed no mercy for the innocent citizens. He used them as his defence against incoming attack of Mahishmati. On the contrary, Bahubali first made sure that innocent citizens remain safe and then proceeds to attack Kalakeya.

Business Mantra: When an organisation is on the trail to achieve the set targets, a continuous tussle is often seen between the boss and employee. In this situation, if the manager/boss treats employee with compassion and kindness, it will lead to a win-win situation. If manager doesn’t understand this aspect then a ‘hate breeds violence’ situation can be encountered in the working culture as depicted in the clipart below. 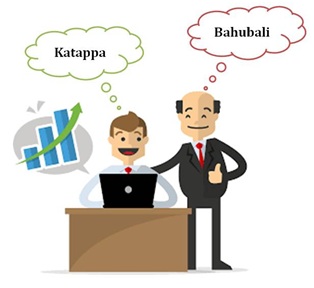 Business Mantra: When an employee faces constant pressure to achieve sales/work targets, a manager must motivate their sub-ordinate to strive harder. 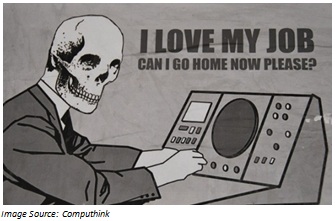 It is the duty of the boss to ensure that the employee doesn’t switches to competitor’s organisation or loses interest in his job. People resource is the most valuable investment that can make and mar the future of business and motivation fuels the dull employee to strive for better results.

Business Mantra: Saturation is inevitable in the business cycle, but what saves a brand from this saturation is ‘creative thinking’. 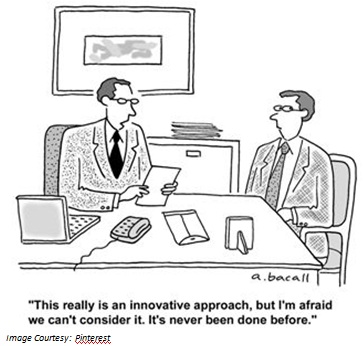 When brands complete with competitor in the same domain, only a single USP can help them gain an edge over the competitor. For instance: in the e-commerce business, every e-tailer sells apparels and other products of similar brands but Amazon takes the lead because of its ‘PRIME’ feature.

Top 10 Books that every MBA Aspirant must read

4. Every WoMan stands equal to Man

Bahubali movie hits hard on the issue of Gender equality. As per the ancient myths and beliefs women are forbidden from entering the battlefield. As against these myths, the female protagonist Sivagami (Ramya Krishnan) is present during the war on the Battlefield. Furthermore, she also takes over the responsibility of the Kingdom when the King of Mahismati dies.

Business Mantra: Gender diversity is a sensitive topic in the corporate world. Women often face the challenge of glass ceiling when they are in the race to reach the top managerial positions. Working women, especially those at top level, form a very miniscule proportion of employed population globally in the corporate world. As a female professional, they encounter issues of Discrimination, Male Dominant Culture and Work-Life-balance; as a result they end up leaving their career aspirations. But if you are a firm believer in gender equality, you will understand the problem faced by the family depicted in this comic strip.

5. Rational thinking is the greatest ‘Asset’

Prior to the War, Bahubali came to know that Kalakeya (Antagonist - A tribal warlord) has a army of 1,00,000 as against the army of 25,000 soldiers with Mahishmati Kingdom. Despite having one-fourth of the army strength as compared to the opponent, Bahubali’s will to wage the war did not deter. He devised a plan to deploy the available army optimally and moved ahead on the trail to emerge victorious. Out of the 25,000 available soldiers (Resources) 10,000 soldiers are assigned to Baahubali (Prabhas) and other 10,000 is assigned to Bhalladeva (Rana) and 5,000 is assigned to Kattapa (SatyaRaj).

This is a case of optimal resource loading and assigning the right people with right task. His biggest asset was ‘rational thinking’ which aided him in using the available resources optimally.

Business Mantra: In the corporate world and economy on the whole, question of ‘choice’ and ‘scarcity of resources’ surrounds managers and business leaders. Irrespective of the fact that you possess scanty or abundant resources, their optimal use is the dire need of the hour. Dilbert also face the same situation in his office and see what solution he offered to his boss.

Hence, when you come across a situation of resource deployment, it is your rational thinking and decision making ability that can make or mar the destiny of a business. If decisions go wrong, it can mar the future of business whereas if the decision goes right the fortune of business and economy is turns to gold gradually.

A masterpiece creation of ‘SS Rajamouli’ has a lot in store to offer to the budding and seasoned managers provided they understand the point-of-view portrayed by the Bahubali’s cast. Bahubali the movie will widen your thinking where critical issues such as organisational culture, politics, office grapevine and gender equality are concerned.

So don’t sit back! Watch the sequel ‘Baahubali: The Conclusion’ before another Management Graduate comes to explains ‘Why Katappa Killed Baahubali’. We hope that the sequel offers more interesting management lessons that can help management graduates become refined problem-solvers in future.