From the king of good times to a wilful defaulter, the Vijay Mallya Saga has been nothing short of a movie plot. But for MBA aspirants and budding entrepreneur it has also presented a unique opportunity to learn how not to do business in India. The following 5 MBA lessons from the Vijay Mallya saga will help you learn from his mistakes and ensure that you do not replicate them once you venture into your business career. 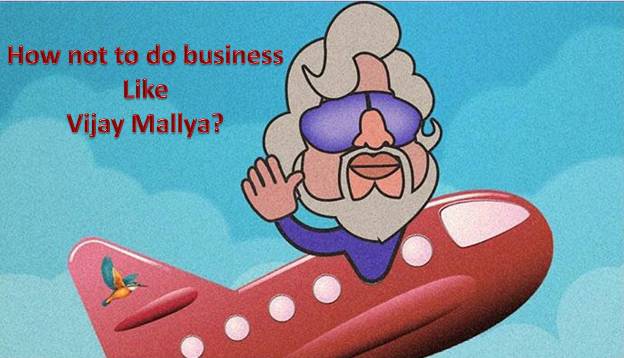 If you are an MBA aspirant or a budding entrepreneur, it is very likely that Vijay Mallya was one of your role models. The flamboyant lifestyle, the larger than life image and multiple success business ventures made him a benchmark for many MBA graduates who started aspiring to be him. But in the last 5 years, how the table have turned! From the ‘King of Good Times’ to a Wilful Defaulter who was arrested yesterday in London; Vijay Mallya has become a topic of worry for the entire nation.

Recently Vijay Mallya was in news as he was arrested in London by the Scotland Yard on April 18, 2017, on the request of 'Government of India' to help extradite the absconding tycoon. He was accused of defaulting on hefty loans amounting to worth Rs. 900 crore taken from IDBI bank in 2009. But on the contrary Mallya was let off on bail within three hours. At present, extradition hearing in Court has begun and attempts are being made to bring him to India to face the law for not repaying loan taken from public sector banks.

The current Vijay Mallya news states that upcoming hearing in the extradition case of will be held on 13 June 2017 in the Westminster Magistrates Court wherein the Crown Prosecution Service (CPS) will argue the matter on behalf of the Indian government to prove him guilty of the money laundering charges.

Meanwhile you must be wondering 'what is Crown Prosecution Service (CPS)?'

The Crown Prosecution Service is responsible for prosecuting criminal cases investigated by the police in England and Wales. It is headed by the Director of Public Prosecutions (DPP).

But as MBA aspirants and future CEO of one of the Fortune 500 companies, we have to look at the bright side. So let’s take a look at 5 Management Lessons we can learn from the ongoing Vijay Mallya Saga.

The kingfisher owner inherited a successful liquor business. While he was good at expanding and scaling up his beer empire, his dream project the Kingfisher airlines was something that didn’t click.

Talking from a business model standpoint, liquor and airlines are poles apart. While liquor business has comparatively less competition and higher profit ratio, sometimes ranging upto 50%, the airlines especially among the private airlines the competition is cutthroat while the profit ratio is merely 2%.

The primary fact to be noted here is that even before the Kingfisher airlines was launched; the aviation industry was in tears. Fuel costs were soaring leading to high operational costs of the airlines. As against the situation Mallya decided to be market Kingfisher as the premium, world-class airline. This is where Mallya’s assessment of airline business went wrong. He tried to replicate his liquor business model of creating a lifestyle product rather than one aimed at mass audience.

Branding is another key which needs to be done right. Branding positions the product in the minds of the customers and also defines the long term loyalty of your brands in the market.

For Vijay Mallya’s Kingfisher Airlines, the story stands true. The airlines portrayed the image of a luxury, glamour and lifestyle traveller in the sky (i.e. premier airlines). The airlines exuberated an image of a luxury traveller through its glamorous airhostesses, red-the colour of vibrancy, and added hospitality which made every passenger feel like a rockstar guest on board-a-craft. While these may work for niche category of Indians, as cost is a major influencer for an average Indian traveller. So the mass market scale up was something that suffered heavily for KFA.

Other airlines in the same domain also faced the same challenge but they passed the test of ‘survival of the fittest’ due to their correct branding in the minds of the customers.

It was Mallya’s decision of acquiring Air Deccan to scale up the business for mass market which marked the beginning of the end for Kingfisher Airlines. During 2006-07, when the acquisition was done, was excess capacity (more supply of seats than demand) in the aviation sector and Air Deccan was lowering ticket prices were comparatively cheaper. This strategy went against the branding done for Kingfisher Airlines. The confused customers were not sure which brand to associate with i.e. luxury lifestyle airlines or budget mass market one.

It was also the time of recession for the aviation companies not only in India but at the global level as fuel prices and sales tax and other levies were costing burnt in the pockets of several aviation companies operating in India. In 2008, the International Air Transport Association (IATA), the global aviation industry body, estimated losses of $5.2 billion. It was this time that instead of planning for good times, Mallya had accumulated a debt of over Rs 7,000 crore and continued to pile up losses for the fate of the company.

This lack of planning marked the downfall of the KFA and the rest we all know is history.

Mallya owed around Rs 10,000 crore, including bank loans, tax arrears and interest dues. This does not include arrears claimed by his former employees. When the bad times fell on his shoulders he kept everything on stake. It was when for the first time Debt Recovery Tribunal (DRT) allowed State Bank of India-led consortium of banks to attack Vijay Mallya's assets to recover the Rs 6203 crore loan defaulted by the tycoon. This order was issued when Mallya’s Kingfisher Airlines Ltd became a bad debt for the economy. They also allowed attaching his properties for recovering the impending amount with interest. In news, it was revealed that Mallya had given a personal guarantee of Rs 248.97 crore while United Breweries Holdings has provided a corporate guarantee of Rs 1,601.43 crore. His persona asset included a pooled collateral security of Rs 5,238.59 crore, which includes Kingfisher House in Mumbai, Kingfisher Villa in Goa, and hypothecation of helicopters.

This ‘going all in’ approach of a Poker game costed Mallya dearly, as he was not left with any thing else he could leverage to garner fresh capital into Kingfisher Airlines.

5. Acknowledge and Learn from your Failures

Despite all these setbacks, Mallya still did not stop soaring high. Over 1,500 staffers, still working on the firm's payrolls stopped operation. But Mallya was drawing huge salaries from Kingfisher — Rs 33.46 crore each in 2011 and 2012.

As per the statistics, Kingfisher Airlines had allegedly not deposited its employees’ provident fund to the government and had run losses in excess of Rs 4,000 crore in 2012-13. Its accumulated losses ran into Rs 16,023 crore, while its net worth fell to a negative Rs 12,919 crore at the end of March 2013. This attitude of not accepting your mistakes and learning from them was another major reason that the situation went from Bad to Worse for Mallya; transforming him from ‘King of Good Times’ to a criminal on the run.

The Kingfisher owner was determined to be a ‘King Of Good Times’ but his poor decision making abilities and lack of a proper vision transformed him into the ‘King Of Bad Times’. As a management student/aspirant, you must consider the growth of the product/service considering your target audience/users. A successful product often turns into a bad debt if you are not able to create a strategy for churning out profits well in time.

We hope that these 5 management lessons from the life of Vijay Mallya will aid you in understanding the importance of dynamic business environment and role of apt decision-making to stand strong in the times of economic turmoil.

For more interesting stories, business happenings and MBA case studies please subscribe to our newsletter. You can also register on this page for receiving latest news and updates about MBA courses and exams.