Are you aware of the fact that Earth’s rotational speed is slowing down every day?

This article talks about the declining rotational rate of Earth and explains the reason behind the same.

Q. Are you aware of the fact that Earth’s rotational speed is slowing down every day? 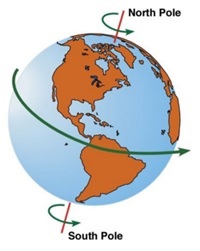 Ans. Yes, it is true! The rotational rate of Earth, though not uniformly, is slowing down continuously which has the effect of lengthening our days by a few seconds every year. Melting of glaciers due to the rising atmospheric temperature is causing the sea level to rise due to which weight of water is shifting from the North Pole to the equator, causing a change in the position of the axis on which the Earth spins which in turn is causing the rotational speed to slow down. The gravity pull of the Moon also contributes to this slow down.