Meaning: An underground tunnel with recesses where bodies were buried (as in ancient Rome). 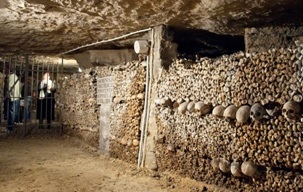 Meaning: 1. An underground tunnel with recesses where bodies were buried (as in ancient Rome).

Usage/Example: 1. The Vatican reported on February 23 that an ambitious restoration project at the catacombs of Sts. Mercellinus and Peter has been completed. (Source: Catholic Culture-23-Feb-2016)

3. One of my favourite games is "The Riddle of Catacombs" which offers an adventure in some rare and exciting destinations