This article provides you the revision notes on Class 12 Chemistry: Chapter - Biomolecules, to give you a quick glance of the chapter. In this part you will get to know about the Proteins, Amino acids and Peptides along with their various types These quick notes are prepared strictly according to the latest CBSE syllabus for Class 12th Chemistry.

Proteins are high molecular mass complex biopolymers made up of smaller units called amino acids.  All proteins contains C, H, O, N and S. Some of these also contain phosphorus, iodine and traces of metals like Fe, Cu, Zn, Mn. All proteins on hydrolysis first give polypeptides and finally give amino acids. 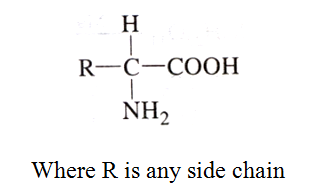 Depending upon the relative position of amino group with respect to carboxyl group, the amino acids can be classified as α, β, γ, δ and so on.

All naturally occuring amino acids are laevoro-tatory (except glycine).

•   Depending upon the relative number of amino and carboxyl groups in their molecule, Amino acid may be categorized as:

o   Neutral: These are the amino acids containing equal number of NH2 and COOH groups.

•     Depending upon their synthesis, amino acids can be categorizd as:

o   Essential Amino Acids: The amino acids which cannot be synthesised in the body and must be obtained through diet, are known as essential amino acids. Examples: Valine, Leucine

o   Non-essential Amino Acids: The amino acids, which can be synthesised in the body, are known as non-essential amino acids. Examples: Glycine, Alanine

•   Amino acid contains both basic acidic (carboxyl group) and basic (amino group) groups in the same molecule. In aque-ous solution, the carboxyl group loses a proton which is accepted by the NH2 group which results in the formation of a dipolar ion known as Zwitter ion. This is neutral but contains both positive and negative charges.

•   In zwitter ionic form, amino acids show arnphoteric behaviour as they react both with acids and bases.

Peptides are condensation products of two or more amino acids.

Peptide linkage is an amide linkage formed by condensation of two amino acids involving −NH2  group of one amino acid and the −COOH group of the other amino acid with the loss of water. 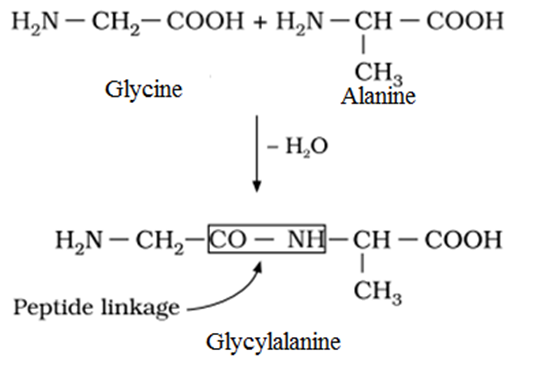 •   On the basis of number of amino acids undergoing the condensation, the peptides can be classified as:

o    Dipeptide: It is a peptide composed of two amino-acid residues.

o    Tripeptide: It is a peptide composed of three amino-acid residues.

o    Polypeptide: It is a peptide composed of more than ten amino-acid residues.

Peptide having molecular mass higher than 10,000 u is called a protein.

•   On the basis their molecular shape, proteins can be classified as:

o   Fibrous proteins: The polypeptide chains run parallel and are held together by hydrogen and disulphide bond forming a fibre like structure.

They are generally insoluble in water.

o   Globular proteins: The polypeptide chains coil around to give a spherical shape. These are soluble in water.

For example: Insulin and albumins.

•   Secondary structure: This structure of a protein refers to the shape in which a long polypeptide chain can exist.

There are two secondary structures of proteins:

o   α-Helix: In α-Helix, the polypeptide chain coil itself into a right handed screw with the −NH group attached to the −C=O of an adjacent turn of the helix by the hydrogen bonding.

It generally exists when R- group is large

o   β-Helix: In this structures, the peptide chains are stretched out to nearly maximum extension and then laid side by side, held together by intermolecular hydrogen bonds.

It generally exists when R- group is small.

•   Tertiary structure: The tertiary structure of proteins represents overall folding and superimposition of the polypeptide chains, i.e., further folding of the secondary structure giving rise to a ball shape or spheroidal shape structure.

It is stabilised by covalent, ionic, hydrogen and disulphide bonds.

•    Quaternary structure: Some of the proteins are composed of two or more polypeptide chains referred to as sub-units. The spatial arrangement of these subunits with respect to each other is known as quaternary structure. 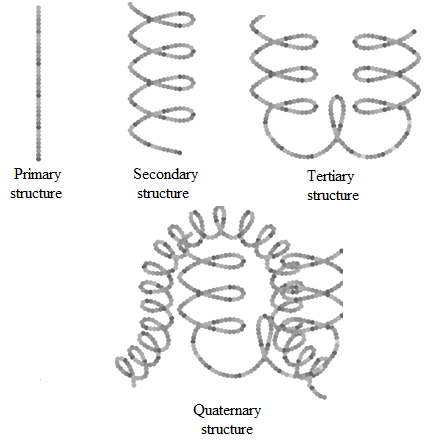 •   The most stable conformation of a protein at a given temperature and the pH is known as its native state.

•   For example: (i) Coagulation of egg white on boiling, (ii) curdling of milk which is caused due to the formation of lactic acid by the lactobacillus bacteria present in milk.