The topics covered in these notes are

The complete notes of the chapter are given below

While charging a capacitor, Maxwell found an inconsistency in the Ampere’s law.

Maxwell suggested the existence of an additional current, called displacement current, to remove this inconsistency.

and acts as a source of magnetic field in exactly the same way as conduction current.

Electric and magnetic fields oscillate sinusoidally in space and time in an electromagnetic wave. The oscillating electric and magnetic fields, E and B are perpendicular to each other, and to the direction of propagation of the electromagnetic wave. For a wave of frequency ν, wavelength λ, propagating along z-direction, we have

The speed c of electromagnetic wave in vacuum is related to μ0 and ε0 (the free space permeability and permittivity constants) as follows:

Electromagnetic waves other than light also have the same velocity c in free space.

The speed of light, or of electromagnetic waves in a material medium is given by

where μ is the permeability of the medium and ε its permittivity. 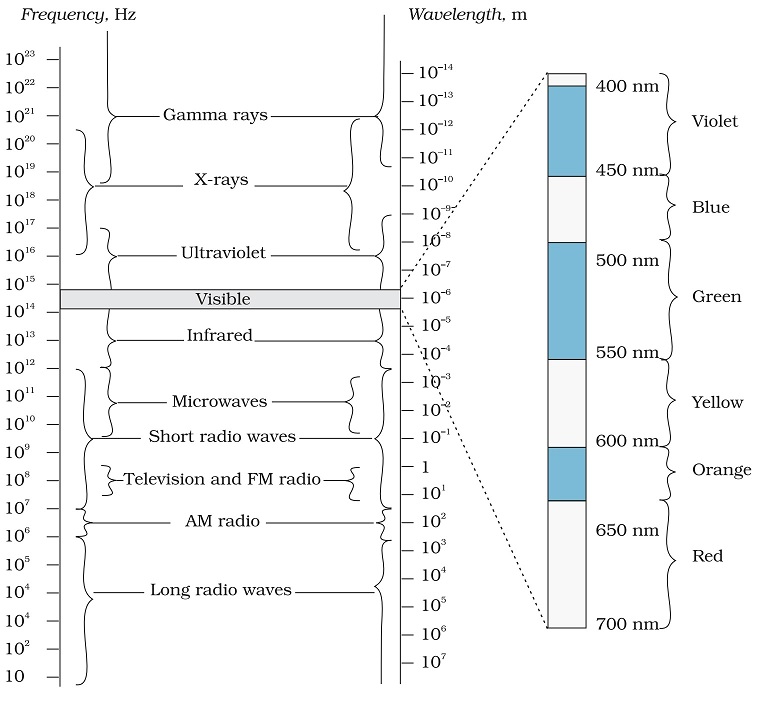 Radio waves are produced by the accelerated motion of charges in conducting wires.

They are used in radio and television communication systems.

They are generally in the frequency range from 500 kHz to about 1000 MHz.

They are produced by special vacuum tubes (called klystrons, magnetrons and Gunn diodes).

Due to their short wavelengths, they are suitable for the radar systems used in aircraft navigation.

Infrared waves are sometimes referred to as heat waves.

Infrared waves are produced by hot bodies and molecules.

Infrared radiation plays an important role in maintaining the earth’s warmth or average temperature through the greenhouse effect.

It is the part of the spectrum that is detected by the human eye.

It runs from about

Visible light emitted or reflected from objects around us provides us information about the world.

The sun is an important source of ultraviolet light.

Ultraviolet radiations can be focussed into very narrow beams for high precision applications such as LASIK (Laser assisted in situ keratomileusis) eye surgery.

Ultraviolet lamps are used to kill germs in water purifiers

One common way to generate X-rays is to bombard a metal target by high energy electrons.

X-rays are used as a diagnostic tool in medicine and as a treatment for certain forms of cancer.

Gamma rays are produced in nuclear reactions and also emitted by radioactive nuclei.

They are used in medicine to destroy cancer cells.