For the benefit of UPSC CDS (II) 2017 Exam aspirants, we are providing practice questions on Geography that cover topics like Solar system, Wildlife in India, Drainage System, etc. 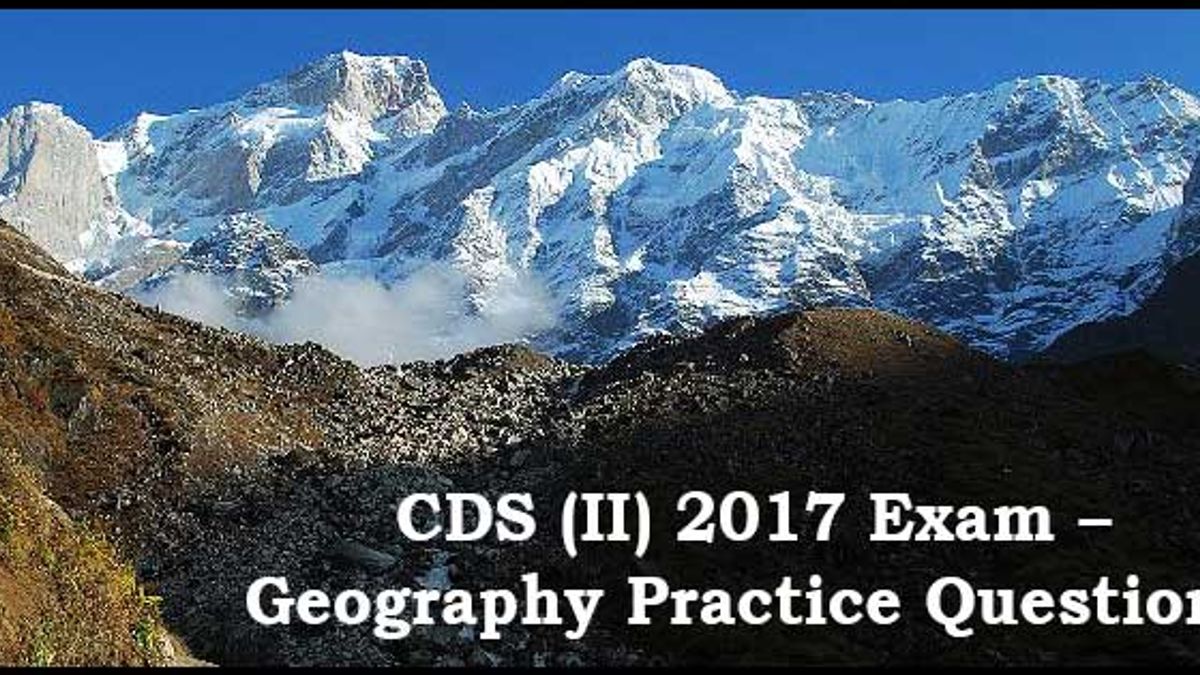 For the benefit of UPSC CDS (II) 2017 Exam aspirants, we are providing practice questions on Geography. This practice set consists of 10 Questions along with answers and detailed explanations.

1. Which is known as the Earth’s twin planet?

The Earth and Venus are called planetary twins because they both are rocky planets with almost same density and same physical size. Both the planets have significant atmospheres surrounding their surfaces.

2. In which one of the following States is Loktak Lake situated?

Loktak lake is the largest freshwater lake in the North -East India, also called the only Floating lake in the world due to the floating phumdis (heterogeneous mass of vegetation, soil, and organic matters at various stages of decomposition) on it. It is located near Moirang in Manipur state, India.
This ancient lake plays an important role in the economy of Manipur. It serves as a source of water for hydropower generation, irrigation and drinking water supply. The lake is also a source of livelihood for the rural fisherman who live in the surrounding areas and on phumdis, also known as “phumshongs”.

3. Which one of the following is the correct sequence of occurrences of rivers from Chennai to Kolkata when travelled by road (shortest distance)?

The Penneru rises on the hill of Nandi Hills in Chikballapur District of Karnataka state, and runs north and east through the state of Andhra Pradesh to empty into the Bay of Bengal. Krishna river rises in Maharashtra and flows through Karnataka, Telangana and Andhra Pradesh.
The Godavari is India's second longest river after the Ganga. It has its source in Triambakeshwar, Maharashtra. It starts in Maharashtra and flows east for 1,465 kilometres emptying into Bay of Bengal draining the states of Maharashtra, Telangana, Andhra Pradesh, Chhattisgarh, Madhya Pradesh, Odisha,  Karnataka and Puducherry through its extensive network of tributaries. The river Mahanadi flows through the states of Chhattisgarh and Odisha. Subarnarekha river flows through Jharkhand, West Bengal and Odisha.

4. With regard to ‘Project Tiger’, which one of the following statements is not correct?

a) It was launched in India in the year 1973.
b) The objective of the Project is to preserve the habitats and tigers therein as natural heritage.
c) The project emphasized to ensure viable population of tigers in India.
d) There are no Tiger Reserves in north-eastern part of India.

Answer. (d) There are no Tiger Reserves in north-eastern part of India.

The tiger reserves in the North East India are – Nameri, Kaziranga and Manas (Assam), Pakke and Namdapha (Arunachal Pradesh) and Dampa (Mizoram).

5. Tsunami waves are the undersea occurrence of earthquake exceeding 7.5 on Richter scale. Which one of the following statements regarding this is not correct?

a) It often generates strong waves.
b) The Pacific coasts are most vulnerable to Tsunami waves.
c) Tsunami waves are also called high-energy tidal waves or seismic sea waves.
d) Tsunami is a Latin word.

The term tsunami, meaning "harbour wave" in literal translation, has its origin in Japanese. It is composed of two words tsu meaning "harbour" and nami meaning "wave". A tsunami also known as a seismic sea wave, is a series of waves in a water body caused by the displacement of a large volume of water, generally in an ocean or a large lake. Earthquakes, volcanic eruptions and other underwater explosions (including detonations of underwater nuclear devices), landslides, glacier calvings, meteorite impacts and other disturbances above or below water all have the potential to generate a tsunami.

6. Which one of the following with regard to Aridisol, one of the soil orders, is not correct?

Aridisols are a soil order in USA soil taxonomy. Aridisols form in an arid or semi-arid climate. Aridisols dominate the deserts and xeric shrublands, which occupy about one third of the Earth's land surface. Aridisols have a very low concentration of organic matter, reflecting the paucity of vegetative production on these dry soils. Water deficiency is the major defining characteristic of aridisols.

7. The fact that the planets move around the Sun, not in circles but in ellipses, was first demonstrated by

For the first time, Kepler discovered that the planets move around the Sun, not in circles but in ellipses.

8. Which of the following is not a tributary of the river Ganga?

The major tributaries of the Ganga are - Karnali, Mahakhali, Gandak, Koshi (Kosi), Ghaghra, and Damodar, Yamuna, Son, Mahananda and Chambal. Musi is a tributary of River Krishna.

9. Which one of the following fishing banks is located off the coast of the United Kingdom?

Dogger Bank is a large sandbank in a shallow area of the North Sea about 100 kilometres off the east coast of England. It is one of the most productive regions for fishing in the world.

10. Which one of the following is correct?

Answer. (d) Rann of Kutch is a Wild Ass Sanctuary.

Indian Wild Ass Sanctuary also known as the Wild Ass Wildlife Sanctuary is located in the Little Rann of Kutch in Gujarat. Spread over 4954 km², it is the largest wildlife sanctuary in India.