Airmen Group X and Y: Salary, Other Benefits and Promotion

After 10+2; the candidates can join IAF Flying Branch through National Defence Academy (NDA) or after graduation, they can join through CDS exam conducted by UPSC every year.

The candidates can join Technical and Ground Duty Branch of IAF after Graduation through Air Force Common Admission Test (AFCAT) exam conducted by IAF every year.

As of now, Women Officers of Education and Accounts Branch only are considered for Permanent Commission.

All graduates and post graduates can join Flying Branch through AFCAT. The engagement period is 14 years from the date of commissioning and it is not extendable.

All graduates and post graduates can join Technical and Ground Duty Branch through AFCAT. The engagement period is for a period of 10 years. An extension of 4 years can be granted.

Commissioning of Officers in the Indian Air Force 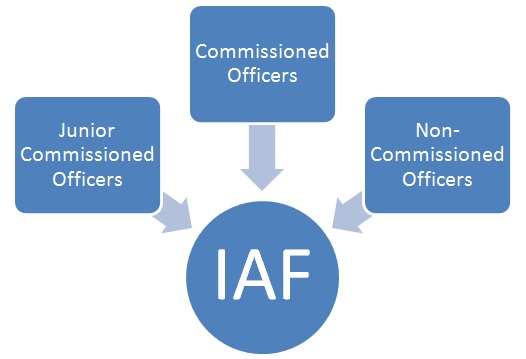 Non-Commissioned Officers of the IAF

It is the lowest rank in the IAF. The Airmen join at this rank only in the IAF. After the promotion, the Aircraftsman becomes Leading Aircraftman. Aircraftmen get the salary in the pay matrix 3.

It is a military rank which corresponds to commanding a section or squad of soldiers. To become a Corporal, Airmen need to serve a minimum of 5 years. After promotion, they get into the pay matrix 4.

This rank is just below the Junior Warrant Officer. To become a Sergeant, Airmen need to serve a minimum of 13 years and 6 months. After promotion, they get into the pay matrix 5.

Junior Commissioned Officers of the IAF

It is the second highest rank in the Junior Commissioned Officer rank. To become a Warrant Officer, Airmen need to serve a minimum of 23 years. After the promotion, they get into the pay matrix 7.

Commissioned Officers of the IAF

A Flying Officer is a commissioned rank which is not only held by the Officers who fly an aircraft but also by the Ground Duty Officers or Air Crew Officers. The post of Flying Officer comes under Time Scale Promotion. On promotion, Flying Officer becomes Flying Lieutenant.

It is also a commissioned rank. The officer in this rank can never be addressed as only “Lieutenant”. The post of Flying Lieutenant comes under Time Scale Promotion. On promotion, Flying Lieutenant becomes Squadron Leader.

It is a senior commissioned rank which is equivalent to Colonel in the army. Promotions above the rank of Wing Commander are based on seniority and merit. An Officer of the Flying Branch will become eligible for consideration to the rank of Group Captain after completing 16 years of service.

It is a single star rank which is the junior most rank in the star category. The Air Commodore Officers act as direct support to the Commanding Air Officer.

The Air vice Marshal is a two-star Officer rank in the Indian Air Force. This rank is just below the rank of the Air Marshal.

It is a three-star rank in the IAF and is held by the Officers who usually hold very senior appointments. This rank is just below the rank of the Air Chief Marshal.

This is the second highest rank and a four-star rank in the IAF. An Air Chief Marshal holds the position of Chief of the Air Staff (CAS), who is the professional head and the Commander of the IAF.

Marshal of the Air Force

Marshal of the Air Force is the highest rank in the IAF which is an honorary war time rank. This rank is the five-star rank. Many countries have this rank, but not all of them use it.

Above all these ranks, there comes the President of India who is the Supreme Commander of the IAF.