Foreign universities may be granted permission to establish campuses on SEZs

The central government is fiddling with the idea of allowing foreign universities to set up educational campuses in the Special Economic Zones, which would ensure that the restrictions currently placed on foreign institutes under the Indian law can be dealt with effectively. 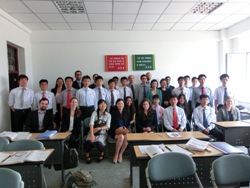 The central government is fiddling with the idea of allowing foreign universities to set up educational campuses in the Special Economic Zones, which would ensure that the restrictions currently placed on foreign institutes under the Indian law can be dealt with effectively. Allowing foreign institutes in India at the Special Economic Zones would mean expulsion of profits of educational institutes, which is currently restricted under the Indian law.

The domestic tariffs of India do not get applied to the SEZs and the companies located at such zones only have to pay the export and import taxes, in order to be able to transact with the rest of the country. The Human Resource Development Ministry is long being thinking of allowing foreign institutes in the country, that could help fill the shortage of quality higher education institutes in the country. It can also attract students from other Asian countries, increasing the validity of India as one of the preferred educational destination. It could also bring down the cost of education for Indian students, who have to go abroad for their higher studies. In the previous and this fiscal year, the students had spent $2.47 and $1.98 billion on higher education abroad.

Due to unattractive tax policies most of the SEZs have failed to draw manufacturing and other service units in the country and thus providing the same land to the foreign educational institutes would be a viable option for the government. The Commerce Ministry of the country has also vouched for allowing the foreign universities in the SEZs and recommended the same to the HRD ministry.

Allowing foreign education institutes in India is being debated since 2010, when former HRD minister Kapil Sibal presented a bill in the Lok Sabha. But it faced severe criticism from the opposition and got expired with the dissolution of the 15th Lok Sabha. In this bill, it was stated that the UGC would govern such foreign universities and there was no provision of repatriation of income provided to home countries.

The present government is thus easing this rule out for inviting best possible foreign institutes in the country. Though there are many infrastructural challenges that need to be taken care off, this move would certainly impress foreign institutes to consider setting up their campuses in India.