In terms of International Relations (IR), the relation between India and South Africa is very important for IAS Exam. The IAS aspirants must have better understanding of India’s relation with other countries of the world which are either trade partner or have cultural relationship with India.

In terms of International Relations (IR), the relation between India and South Africa is very important for IAS Exam. The IAS aspirants must have better understanding of India’s relation with other countries of the world which are either trade partner or have cultural relationship with India.

India and South Africa has a long and distinguished history of their friendship. It was from long back to the period when Mahatma Gandhi started his Satyagraha movement in South Africa over a century ago but their relations have grown stronger since the end of apartheid in South Africa in the year 1994. 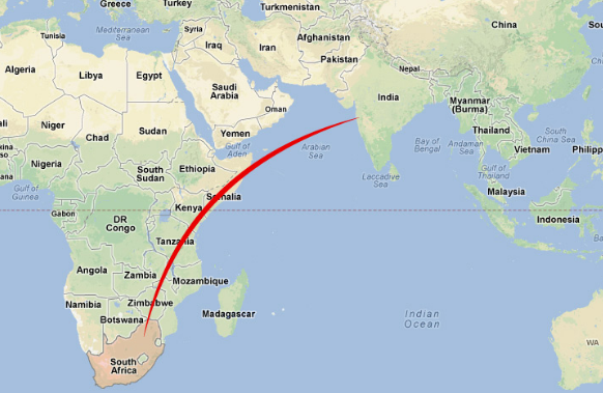 India and South Africa have developed close strategic, cultural and economic ties over the decades. They also share an extensive energy and trade partnership. India stands largest purchaser of coal from South Africa and both the country moving ahead since the South Africa’s acceptance into the BRICS group in 2011.

During recent visit of Indian Prime Minister, Narendra Modi, the following Agreements and Memoranda of Understanding were signed by the two countries:

•    Memorandum of Understanding on ICT

•    Memorandum of Understanding on Tourism; and

While discussing with the South African President, Narendra Modi agreed and emphasise that there is still scope for the further strengthening and deepening of relations in the political, economic, scientific and socio-cultural spheres between these two nations.

After end of Apartheid in 1994 in South Africa, the bilateral and diplomatic relations between the countries have came into real significance. Nelson Mandela, South African leader of Apartheid Movement was awarded Bharat Ratna and Mahatma Gandhi Peace Prize in 1990 and 2000 respectively. Both the nations have similar stand on sports and promoting sporting ties. The Indian national cricket team and the South African national cricket team frequently visiting and participating tournaments in organised by either country.

The comprehensive Strategic Partnership between these two nations was established through the Red Fort Declaration (March 1997), and reaffirmed in the Tshwane Declaration (October 2006) hailed as an important mechanism that has contributed in the past to both South Africa and India achieving identified national objectives.
In order to elevate efforts in achieving the goals set out in the Declaration, both the nations are set to celebrate its twentieth commemoration of the signing of the Red Fort Declaration in 2017.

Economic relations between these two nations have flourished since the establishment of diplomatic relations in 1993. On the trade front, value of bilateral trade has increased three fold from US$2.5 billion in 2003-2004 to US$ 7.5 billion in 2008-2009. During the visit of President Zuma to India, both sides agreed to work towards a target of US$ 10billion in bilateral trade by 2012. The trade target was revised to US$ 15 billion by2014 during the visit of Commerce and Industry Minister in January, 2011 to South Africa as the bilateral trade target was achieved in FY 2010-11.

Both the countries have great potential for trade growth between them including vehicles and components thereof, transport equipment, drugs and pharmaceuticals, engineering goods, footwear, dyes and intermediates, chemicals, textiles, rice, and gems and jewellery, etc.

From South Africa, India imports including gold, steam coal, copper ores and concentrates, phosphoric acid, manganese ore, aluminium ingots and other minerals.
Over the decades, investment by the Indian companies including Tata (automobiles, IT, hospitality, and ferrochrome plant), UB Group (breweries, hotels), Mahindra (automobiles) and a number of pharmaceutical companies, including Ranbaxy, CIPLA, etc as well as IT companies have find South Africa as their preferred destination.

The India-SACU Preferential Trade Agreement, one of the important negotiation under process and five rounds negotiation already been done between India and SACU (Southern African Custom Union) till date so far and last negotiation was held in 2010.

The presence of Indian commercial banks including State Bank of India, Bank of Baroda, Bank of India, EXIM Bank and ICICI Bank also helped in making healthier interaction between India and South Africa.

India and South Africa has immense opportunity to make their strong presence in African continent. Both the country can take most benefit of it and ultimately will be beneficial for all the African nations too.

India has better opportunity to establish herself as a strong leader among BRICS nation if they continued their momentum with South Africa as well. Apart from bilateral relations with South Africa, India should also focus on the groups like IBSA (India, Brazil, South Africa) and IORA (Indian Ocean Rim Association) which will help India to make it strong presence in littoral nations of African continent. India also has an advantage of support while at of bidding for permanent membership of UN Security Council.