This article is about the previous years' opening and closing ranks of IIT Palakkad for JEE aspirants. Indian Institute of Technology Palakkad, located in Palakkad, Kerala. It is one of the 5 IITs that were proposed in the Union Budget of India, 2014. IIT Palakkad is also known as IITPKD.

JEE Advanced is the gateway to top IITs. With JEE Main application forms out searches like “Opening and Closing rank of IIT XYZ”  are hitting search engine list, predictions of minimum rank required, are creating a buzz too. While there is no predetermined closing rank set up by the institute, last year cutoff list is really helpful for aspirants to judge themselves. The opening and closing rank of IIT Palakkad for the years 2015, 2016, 2017 and 2018 have been provided in this article, which will give all the applicants a fair knowledge of their standings, and possibilities of themselves clearing the admission list. 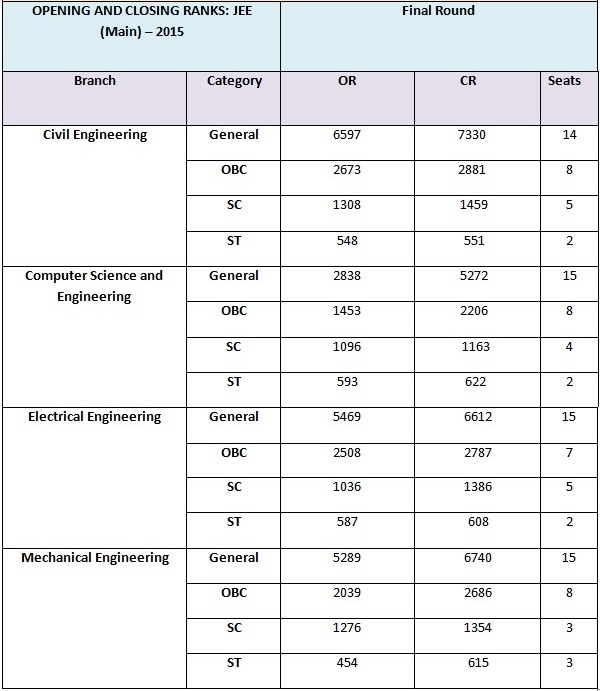 Indian Institute of Technology Palakkad, located in Palakkad, Kerala. It is one of the 5 IITs that were proposed in the Union Budget of India, 2014. IIT Palakkad is also known as IITPKD.

IIT Palakkad initially started its functioning from the Ahalia integrated campus from 3rd August, 2015. Till MHRD Ministry appoints the Director and other Faculties, IIT Madras is committed to provide the college with temporary mentors that will fill up the position.

IIT Palakkad is dedicated to provide an environment wherein faculties and students are motivated to think innovative, share thoughts and work together to create a better future.

Bachelor of Technology (a four-year program) is offered by IIT Palakkad in various streams. Initially they have started with the fields mentioned below:

Permanent campus of IIT Palakkad which is spread out in 500 acres of land is expected to be ready in a couple of years. After that, the well noted institution earning the nationwide importance will be set to serve the nation by providing quality education and facility to students enrolled. Within few years of its functioning, IIT Palakkad is one of the favorite choices among the aspirants.