The National Health Policy 2017 is very important for IAS preparation. The questions based on the government’s policies asked every year in the IAS Exam. Here, we have provided an analysis of the NHP 2017, very important for the IAS Mains Exam. 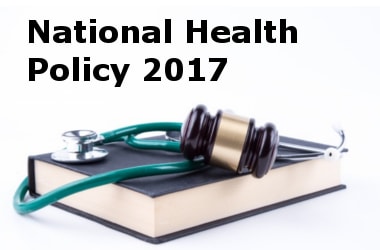 The National Health Policy 2017 (NHP, 2017) has been announced by the central government on 16 March 2017. Earlier in 2016, the Supreme Court had directed the central government to make a strong and effective health policy which must focus everyone in a comprehensive and integrated way to move in the direction of wellness. The new policy looks much positive to provide a better healthcare system accessible to all and well equipped of provisions to address the anomalies of existing policies.

The questions based on the schemes and the policies of the government asked every year in IAS Prelims and IAS Mains Exam. Here, we have provided an analysis of the National Health Policy 2017, which is very important in terms of IAS Exam 2017.

Q1. The Public Health sector in India is in urgent need of a higher government spending. Discuss

Q2. What are the positive impacts of the recently announced National Health Policy 2017 (NHP 2017) by the government?

Q3. Discuss the relevance of the National Health Policy 2017 with respect to the existing issues in India’s healthcare sector.

The last health policy was formulated in the year 2002. The socio-economic and epidemiological changes since then call for the formulation of a New National Health Policy to address the current and emerging challenges.

Key Highlights and Positive Impact of the National Health Policy 2017

However, the government has taken many initiatives in the last few decades in order to address the existing challenge lies in the health sector in India. The National Rural Health Mission was one of the flagship schemes of the government, which had the target during 12th Five Year Plan to reduce IMR to 25/1000 live births, but the IMR reduced from 42 in 2012 (Sample Registration System) to 40 in 2013 (SRS) while the target of MMR was to reduce MMR to 1/1000 live births but MMR has reduced to 167 in 2011-13 (SRS).

The government spending in the public health care system is rising year by year, but the issues like lack of capacities and human resource shortage in certain states are the major concern for the ineffectiveness of the targeted policy. In order to minimise high out-of-pocket spending, the government should put the early deadlines for public institutions to offer essential medicines and diagnostic tests free to everyone on a primary basis. The prevailing challenges in the health sector, are much more complex in nature like complexities of culture and customs, economic situations, geography, ethnicity, and political situations make it more difficult for the policy-makers. The problems faced by Indians like high incidence of communicable and non-communicable diseases, the low performance of maternal and child health indicators, and nutritional problems, particularly that of women and children, are the issues that exist in every part of the country even today apart from the burden of chronic, non-chronic diseases and other socio-economic social factors.