In this article you will get CBSE Class 10 Science chapter 4, Carbon and Its Compounds: NCERT Exemplar Problems and Solutions (Part-II). Every question has been provided with a detailed explanation. All the questions given in this article are very important to prepare for CBSE Class 10 Board Exam 2017-2018. 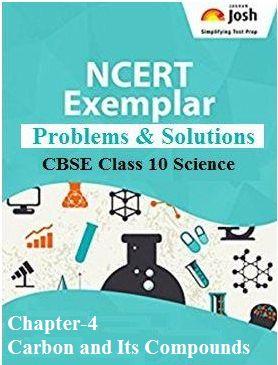 Ethyne is a hydrocarbon with molecular formula C2H2. Here two carbon atoms are bonded together by a triple covalent bond and one hydrogen atom is bonded with each carbon atom through a single covalent bond. Hence the electron dot structure of ethyne molecule can be representes as:

Question. 31 Write the names of the following compounds. 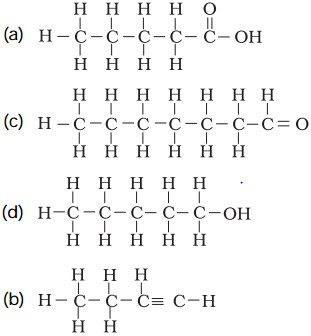 (a) Pentanoic acid as it contains five carbon atoms with one –COOH group.

(b) Pentyne as it contains five carbon atoms in a straight chain with one triple covalent bond at terminal.

(d) Pentanol because it contains 5 carbon atoms with one –OH group.

Question. 32 Identify and name the functional groups present in the following compounds.

Question. 33 A compound X is formed by the reaction of a carboxylic acid C2H4O2 and an alcohol in the presence of a few drops of H2SO4. The alcohol on oxidation with alkaline KMnO4 followed by acidification gives the same carboxylic acid as used in this reaction. Give the names and structures of

(a) Carboxylic acid with molecular formula C2H4O2 is acetic acid or ethanoic acid having the structure as:

(b) Given alcohol forms acetic acid on oxidation with alkaline KMnO4 followed by acidification. Therefore, it must be ethanol with structure CH3 ─ CH2 ─ OH.

(c) Reaction of ethanoic acid with ethanol in presence of a few drops of conc. H2SO4 is an esterification reaction that forms an ester, ethyl ethanoate (CH3COOC2H5).

Question. 34 Why detergents are better cleansing agents than soaps? Explain.

Detergents and soaps both are cleansing agents but detergents can be used even in hard water whereas soaps cannot use in hard water.

Soaps forms an insoluble precipitate with calcium and magnesium ions found in hard water. This precipitate is called as scum which sticks to the cloths and makes the cleaning even more difficult.

On the contrary, detergents have charged ends and do not form insoluble precipitates with calcium and magnesium ions.

The cleansing action of detergents is stronger than soaps. They are more soluble in water therefore it is convenient to use them compare to soaps.

Question. 35 Name the functional groups present in the following compounds.

Question. 36 How is ethene prepared from ethanol? Give the reaction involved in it.

This conversion is possible through dehydration reaction which occurs in the presence of concentrated sulphuric acid or concentrated phosphoric (V) acid, H3PO4 at 160°C.

Question. 37 Intake of small quantity of methanol can be lethal. Comment

When methanol is entered in our body, it is metabolized in the liver and form formaldehyde which further converted to formate.  Formate is essential for survival because it acts as building block for many biomolecules but high levels of it can cause toxicity.

Formaldehyde also reacts with living cells and can cause coagulation of protoplasm. Excess of methanol in our body also affects the optic nerve and can cause blindness.

Question. 38 A gas is evolved when ethanol reacts with sodium. Name the gas evolved and also write the balanced chemical equation of the reaction involved.

When ethanol reacts with sodium metal, it forms sodium ethoxide (C2H5O−Na+) and hydrogen gas is released. The reaction is as follows.

So the gas is hydrogen gas that is evolved during the reaction.

Question. 40 Carbon, group (14) element in the periodic table, is known to form compounds with many elements.

Write an example of a compound formed with

(a) Chlorine (group 17 of periodic table)

Question. 41 In electron dot structure, the valence shell electrons are represented by crosses or dots.

(a) The atomic number of chlorine is 17. Write its electronic configuration.

(b) Draw the electron dot structure of chlorine molecule.

(a)    Atomic number of chlorine atom is 17. Hence the electronic configuration of Cl (17)would be;

Question. 42 Catenation is the ability of an atom to form bonds with other atoms of the same element. It is exhibited by both carbon and silicon. Compare the ability of catenation of the two elements. Give reasons.

Both carbon (C) and silicon (Si) are placed in 14th group of the periodic table and have four valence electrons in their valence shell.

Both of them can form four covalent bonds with other elements and can also exhibit the phenomenon of catenation.

Catanation is the self linkage property of atoms due to which they can bond with other similar atoms to form long chain compounds.  It depends on the bond energy of atoms.

Question. 43 Unsaturated hydrocarbons contain multiple bonds between the two c-atoms and show addition reaction. Give the test to distinguish ethane from ethene.

Ehene is an unsaturated hydrocarbon as it contains a double covalent bond between two carbon atoms.

Presence of un-saturation or double covalent bond can be distinguished with the help of bromine solution in CCl4. It is an orange colour solution which shows colour change after addition in ethene solution.

(CH2Br ─ CH2Br). It is an addition reaction of ethene due to presence of double covalent bond in the molecule.

Ans. The matching of Column I and Column II is as given

Question. 45 Write the structural formulae of all the isomers of hexane. 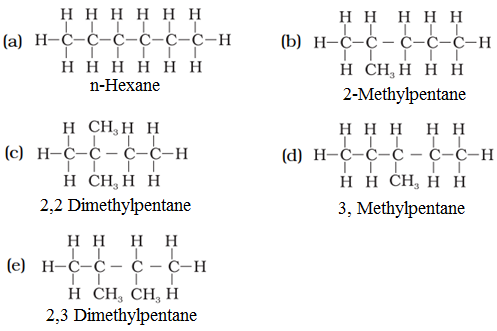 Question. 46 What is the role of metal or reagents written on arrows in the given chemical reactions?

(a) Given reaction represents the hydrogenation of alkene which converts alkene to alkane by addition of hydrogen atoms to the carbon atoms included in double bond. Thus, Nickel (Ni) here acts as the catalyst for hydrogenation reaction.

(b) It is the esterification reaction between carboxylic acid and alcohol that forms ester and water molecules. Here concentrated sulphuric acid acts as catalyst as well as dehydrating agent. It provides hydrogen ions to initiate the reaction and also absorbs water molecules so that reaction can form more products.

(c) This reaction involves the conversion of alcohol (ethanol) to carboxylic acid (acetic acid). It is an oxidation reaction and alkaline KMnO4 acts as an oxidising agent for ethanol.