NCERT Solutions for Class 5 EVS Chapter 12 – What If It Finishes…?

Read NCERT Solutions for Class 5 EVS Chapter 12 to get the latest and accurate answers. 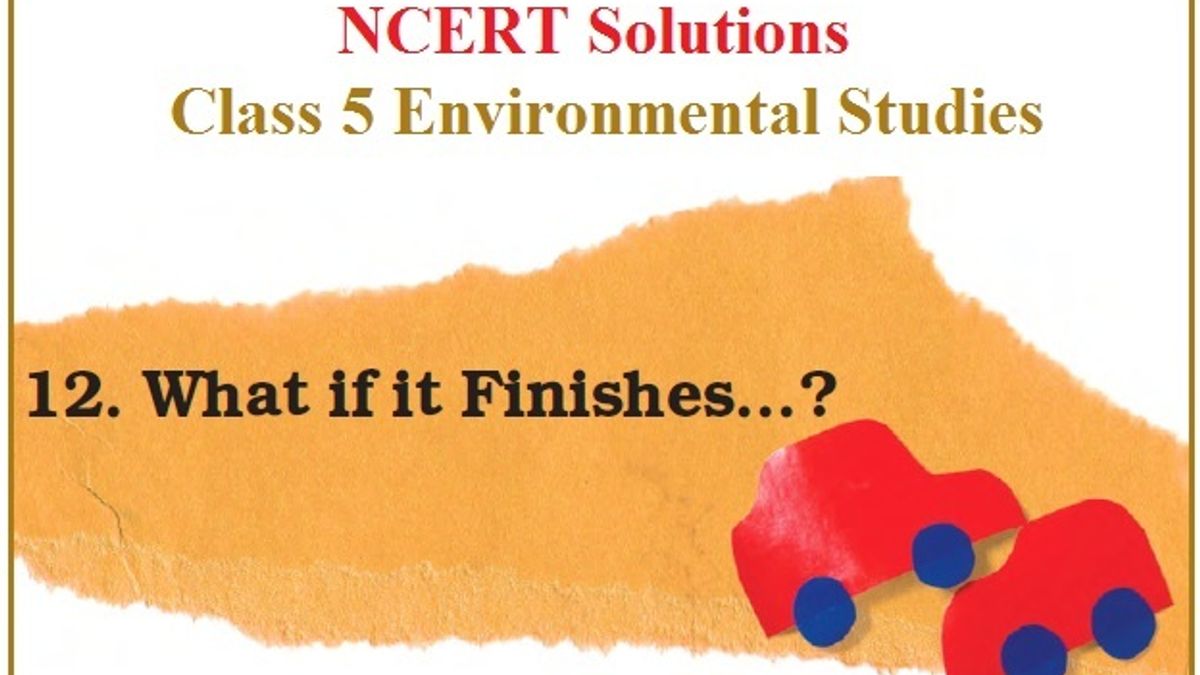 NCERT Solutions for Class 5 EVS Chapter 12–What If It Finishes…?

NCERT solutions for Class 5 EVS Chapter 12:What if it Finishes are available here in PDF format which students can download absolutely free. We have collated the detailed and accurate answers for all questions given in chapter 12 of class 5 EVS book. These solutions will give a pleasant learning experience to all students of class 5.

NCERT Solutions
Class 5 EVS
Chapter 12: What if it Finishes…?

Look at the Picture and Write

(i) What are the different kinds of vehicles that you can see?

(ii) What do you think they need as fuel?

(iii) Which of the vehicles do you think give off smoke? Put a red mark on those.

(i) It can see many different types of vehicles like bus, car, cycle, motorcycle, scooter, auto-rickshaw, etc.

(ii) How do you come to school?

(iii) How do your family members go to work from home?

(iv) What problems can we have from smoke coming out of vehicles?

(v) What kind of problems can we face from noise of vehicles (honking)?

(i) Yes, I ride a bicycle. I go to my friend’s house or other nearby places like market, playground on my bicycle.

(iv) The smoke coming out from the vehicles causes air pollution. This polluted air can cause many health issues like cough, nausea, headache and lung diseases.

Find Out and Discuss

(i) Which states of India have oil fields?

(ii) Besides oil, what else is found deep inside the earth?

(iii) Find out the traffic rules and discuss them in the class.

(iv) We should use petrol and diesel judiciously. Think why?

(i) States of Assam, Gujarat, Maharashtra and Andhra Pradesh have oil fields.

(iii) Following traffic rules must be discussed in class:

(iv) Coal and petroleum should be used judiciously because they are limited which will soon get exhausted. Moreover, they also cause a lot of pollution if used extensively.

(i) What all can vehicles run on?

(ii) What kinds of problems will we face, if the number of vehicles keeps on increasing? For example, more traffic on the road. Talk to your elders and write about it.

(iii) Manju said, “Why doesn’t everyone use a bus?” What do you think, why don’t people travel by buses?

(iv) Suggest some ways to deal with the problems arising out of the growing number of vehicles.

(v) What are the benefits, if we switch off the engine of the vehicles at the red light on the road?

(i) Vehicles can run on coal, petrol, diesel, CNG and electricity.

(ii) If the number of vehicles keeps on increasing then many sever problem will arise like increase in traffic jam on the roads, increase in air pollution and noise pollution, etc. Chances of accidents happening on roads will also increase.

(iii) People do not travel by buses for their own convenience and comfort.

(iv) Some ways to deal with the problems arising out of the growing number of vehicles are:

(v) Switching off the engine of the vehicles at the red light on the road will help to save fuel and cause less pollution.

Find Out and Write

(i) What is the price of petrol and diesel in your area?

(ii) Why are the prices of petrol and diesel going up?

(iii) In one month how much petrol and diesel is used in your home? What is it used for?

(ii) The prices of petrol and diesel are going up because its production is quite less as compared to its consumption.

(iii) In our home about 30 litres of petrol and 20 litres of diesel are used on conveyance.

See the Poster and Write 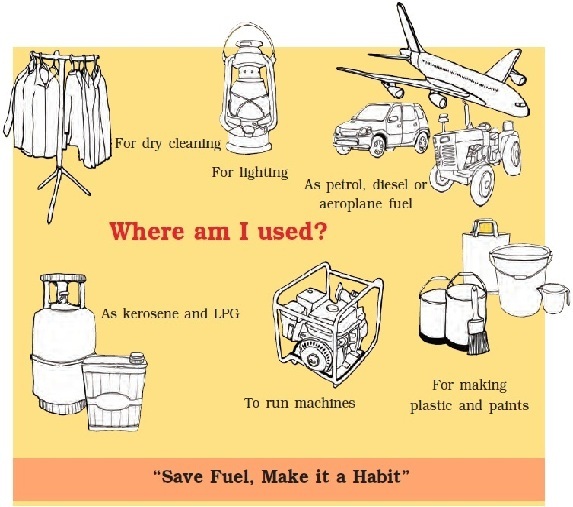 (ii) Where is diesel used? Find out.

(i) Oil is used in following different tasks or ways:

(i) For dry cleaning, in generators, to run vehicles, cook food as kerosene and LPG, to run machines, to make plastic and paints, etc.

(ii) Diesel is used as fuel in vehicles such as cars, tractors, buses and trucks. It is also used in generators to produce electricity.

(i) What would happen if you don’t get petrol or diesel for a week in your village or town?

(ii) Suggest some ways to save oil.

(i) if you don’t get petrol or diesel for a week in our village or town then the transportation will get stopped making it difficult to commute to different places.  Small factories or industries running in the town will stop operating.

(ii) Following are some ways or measures to save oil:

(i) Have you ever collected dry wood or made cow dung cakes? How are they made?

(ii) Do you know anyone who collects dry wood or leaves to be used for lighting a chulha?

(iii) Who cooks food in your family? What about other families in your area?

(iv) If they cook food using wood or upla (cow dung cakes), what difficulties do they face due to smoke?

(v) Can Durga use anything else instead of wood? Why not?

(i) Yes, once I collected dry wood and also made cow dung cakes during my visit to our ancestors’ village. To make cow dung cakes, hay is mixed with cow dung which is then moulded into a shape with its bottom being flat and upper part being round. These are then dried up in the sun to make them hard.

(ii) Yes, I have seen villagers collecting dry wood and leaves for lighting a chulha.

(iii) My mother cooks food in our family. Mostly ladies cook food in my area. Also, in some homes servants cook food.

(iv) The smoke coming out of chulha due to the burning of wood or cow dung cakes causes serious health issues like coughing, nausea, headache, irritation in eyes and lung diseases.

(v) No, Durga cannot use anything else instead of wood because she is too poor to buy other convenient fuels to cook food.

Tell from the Graph

Find Out from Your Elders:

(i) When they were young what was then used to cook food at home?

(ii) In the past 10 years use of which cooking fuel has increased in your area? Use of which fuel has decreased?

(iii) Guess the use of which fuel would increase and which would decrease in the next 10 years.

(i) When they were young; mainly wood, cow dung cakes and coal were used to cook food at home.

(ii) Use of LPG has used in the past 10 years for cooking food in my area. Use of wood, cow dung cakes and coal has decreased.

(iii) Use of LPG and electricity will increase and use of wood, coal and cow dung will decrease in the next 10 years.

What we have learnt

(i) Imagine that a company has given you a chance to design a new vehicle like a mini bus. What kind of vehicle would you design? Write about it. Draw a picture and colour it.

(ii) While making the design, who did you plan to take care of:

(iii) Look out for news reports on oil. Cut these and make a collage. Put up a chart in your classroom. Also write your own views on these reports.

(iv) Make a poster with a message on saving fuel. Write a slogan too. Where would you like to put up this poster?

(i) I will design a vehicle which causes no or minimum pollution, is highly fuel efficient and is comfortable for all especially for children, elderly should and differently abled people.

(ii) While making the design, following things will be taken care of

(iii) Students mat collect the daily updates on oil prices and paste the same on a chart to show the trends of oil prices in their respective cities. A report on the rising prices of oil can be prepared by mentioning the reasons of this price hike and ways to control the consumption of oil.

(iv) Aposter with a message on saving fuel can be drawn as follows: 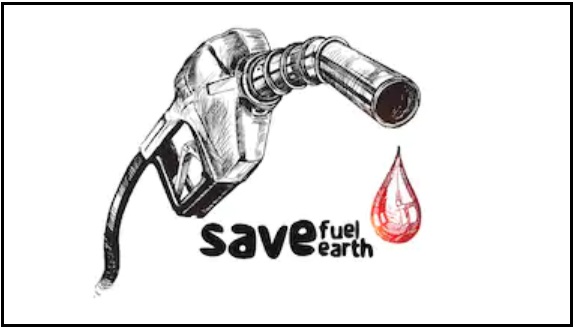 Slogan: Save Fuel, Save Earth

I would like to put up this poster on traffic signals or near petroleum pumps.

Students may also download all the solutions for this chapter in PDF format so that they can refer the solutions whenever required.

We have compiled the chapter-wise solutions for class 5 EVS. All these solutions have been prepared by our subject experts. Students can find here the accurate solutions with simple details which make it easy to grab the concepts and understand the logics in a much easier way. All the NCERT Solutions are available for free of cost.

NCERT books are best for class 5 students to understand all the concepts and facts taught to them. So, students must be encouraged to read NCERT books to make learning easy and excel in their academics. Students may read and download the NCERT Books for class 5 from the following links: