NCERT solutions and NCERT textbooks are important resources for the preparation CBSE board exams and competitive exams. In this article, we have provided the solutions of NCERT Class 12 Biology textbook, chapter 5, Principles of Inheritance & Variation. These solutions are also available for download in PDF format.

NCERT Solutions for Class 12 Biology – Chapter 5, Principles of Inheritance and Variation are available here. You can also download the NCERT Solutions of the chapter in PDF format with the help of download link given at the end of this article. Some important topics of this chapter are Mendel’s laws of inheritance, inheritance of one gene, inheritance of two genes, sex determination, mutation, genetic disorders. Most of the questions given at the end of Chapter 5, Principles of Inheritance and Variation are based on these topics. These NCERT problems and solutions are important for CBSE 12th Biology board exam 2018 as well as medical entrance exams like NEET (National Eligibility cum Entrance Test).

NCERT solutions and problems of Class 12 Biology ‒ Chapter 5, Principles of Inheritance and Variation are given below:

Question1. Mention the advantages of selecting pea plant for experiment by Mendel.

Pea plants were having seven contrasting traits like tall and dwarf, yellow and green seeds. These contrasting characters helped a lot to Mendel and he also chosen true breeding pea plant varieties.

Question2. Differentiate between the following –

(a) Dominance and Recessive

(b) Homozygous and Heterozygous

(a) Dominance – Trait which suppresses the effect of other trait. E.g. tallness suppresses dwarfness.

Recessive – Trait which is suppressed by the effect of other trait.

E.g. dwarfness is suppressed by tallness.

(c) Monohybrid – When genes control only one factor.

Dihybrid – When one gene controls more than one factor.

Question3. A diploid organism is heterozygous for 4 loci, how many types of gametes can be produced?

Loci are the place on the chromosome where genes lie. So, loci and genes are synonyms words. If a diploid organism is heterozygous for 4 loci then it will have four contrasting traits. Aa, Bb, Cc, Dd and during meiosis 16 different kinds of gametes will be formed.

Question4. Explain the Law of Dominance using a monohybrid cross.

According to Mendel’s law of dominance, Monohybrid cross the dominant allele suppresses the presence of recessive allele. But it does’t mean that the recessive allele has lost its existence. It remains hidden in F1 generation and reappears in the next generation.

When Rr are self crossed recessive allele rr again reappears in F2 generation in 9:3:3:1 ratio.

Question6. Using a Punnette square, work out the distribution of phenotypic features in the first filial generation after a cross between a homozygous female and a heterozygous male for a single locus. 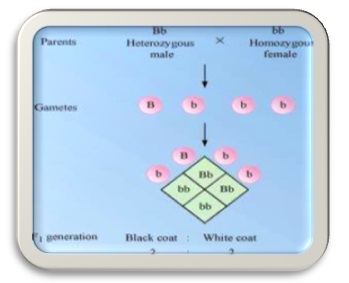 Question7. When a cross in made between tall plants with yellow seeds (TtYy) and tall plant withgreen seed (TtYy), what proportions of phenotype in the offspring could be expected to be

(b) Dwarf and green.

When a cross in made between tall plants with yellow seeds (TtYy) and tall plant withgreen seed (TtYy), the phenotypic proportion in the offspring could be expected are three tall and green, one dwarf and green.

Question8.Two heterozygous parents are crossed. If the two loci are linked what would be the distribution of phenotypic features in F1 generation for a dihybrid cross?

When two or more genes co-exist on the same chromosome is called linkage. Phenotypic ratio in F1 generation for a dihybrid cross will be in the ratio 9:3:3:1 for F2 generation.

Question9. Briefly mention the contribution of T.H. Morgan in genetics.

T.H. Morgan led to the discovery of chromosomal theory of inheritance. He carried out many dihybrid crosses on Drosophilla to study sex linked disease. These crosses were some hoe similar to dihybrid crosses made by Mendel.

After crossing between yellow-bodied white eyed females with brown-bodied red eyed males. He found that independent of each others in F2 generation have phenotypes in the ratio 9:3:3:1.

The above ratio clears that the gene were located on X-chromosomes and if two genes are located on the same chromosome then these ratios 9:3:3:1 are formed. Morgan discovered this phenomenon was due to presence of two or more genes in a dihybrid cross and he coined the terms linkage and recombination to describe the origin of non-parental gene combination.

Morgan also discovered that if the group of genes are on same chromosomes, then they are linked lightly while others were linked loosely. 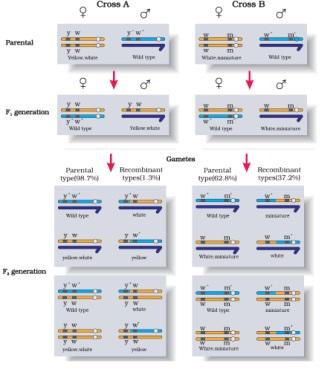 Question10. What is pedigree analysis? Suggest how such an analysis, can be useful.

A kind of genetic analysis by which inheritance of a gene is traced in the family of a person.

Scientific chart of ancestors drawn with the help of certain specific symbols for pedigree analysis of a person is termed pedigree analysis. By stydingthese charts genetic counsellors canhelp in preventing certain genetic disorders like haemophilia, sicle cell anaemia in future generation of that family.

Question11. How is sex determined in human beings?

In human being, sex chromosomes of female is while of male is XY.

Blood group in human is controlled by three kinds of alleles Ia Ib and Io and these alleles can express themselves independently. So, if the father has blood group A and mother blood group B then their progeny could have AB blood group.

(a) When both the comtrasting alleles of a gene are independently expressed is called co-dominance. E.g. human blood group.

(b) It is a condition when heterozygous produces intermediate phenotype. It happens because of partial suppression of one allele by other. E.g. Flower colour in snapdragon plant.

Question14.What is point mutation? Give one example.

When mutation occurs in single base pair of DNA it is termed as Point mutation.e.g. Sickle cell anaemia.

Question15. Who had proposed the chromosomal theory of inheritance?

Question16. Mention any two autosomal genetic disorders with their symptoms.

(a) Sickle cell anaemia – When because of point mutation , the biconcave shape of Hb converts into sickle shape.