SRM University has been awarded a Four Star rating by Quacquarelli Symonds, SRM University now features amongst the prestigious group of universities in the world in QS World University Rankings.

SRM University has been awarded a Four Star rating by Quacquarelli Symonds (‘QS’), a leading global higher education company with over 250 employees across 5 continents spanning over 25 languages. Only two universities in India can boast of this unique distinction and 50 all over the world. In addition to winning the 4-star award overall, SRM University has been awarded the maximum 5- star rating on Teaching, Employability and Inclusiveness. 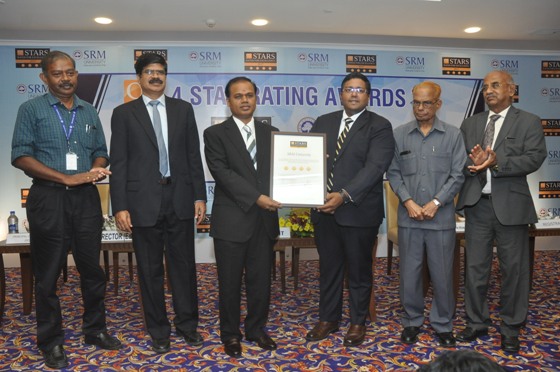 QS is best known for publishing the QS World University Rankings – the world’s most popular university ranking system.  In addition to ranking,  QS  also carries out QS Stars rating which allows students to get a wider picture of an institution’s qualities, looking at everything from the employability of graduates, to sports facilities and community engagement. It is designed to reflect the nuanced mission of universities and the needs of students who may be interested in things other than those to which traditional rankings are necessarily limited.

The system evaluates universities across a wide range of important performance indicators as set against pre-established international standards. By covering a broader range of criteria than any world ranking exercise, QS Stars™ shines a light on both the excellence and the diversity of the rated institution.

The QS Stars audit evaluates an institution against over 50 different indicators, and awards universities between one and five + stars over eight wider fields, as well as an overall rating. The broad parameters under which a university is audited by QS are 1. Teaching 2. Employabilty 3. Research 4. Internationalization 5. Facilities 6. Innovation 7. Inclusiveness and 8. Specialist program. Based on the above parameters QS awards an overall rating also. The process takes around 8-10 months once the university decides to subject itself to the rigorous audit by QS. For SRM university the process started in Dec. 2016.

SRM University joins the prestigious group of universities in the world. QS was formed in 1989 in perysylvania. It helps in providing quality assessments to guide students to make life changing decisions. It is a London based organization. It is more than ranking and rating is more comprehensive. QS has the largest coverage of universities and it is one of the bench marks for universities in India. QS Asian ranking will be published soon ,Mr.Ashwin Fernandes, Regional Director -Middle East & Africa,QS said QS ranking covers most of the aspects including faculties social responsibilities etc. There are six indicators and most of the aspects of university academics and administration are covered QS provides global standards among universities and it is a difficult system in India. QS ranking helps universities to assess their strength and meritness. SRM is one of the two universities which has get 4 Star in India and one of the 50 universities in the world.