Directions (1-9): The following question has a pair of words or numbers or letters having a relationship followed by another pair in which one of them is missing. Understand the relationship between the parts of the first and then select from the options below that best suits the missing part of the second pair.

Explanation: The second set of letters is obtained by moving the corresponding character in the first set seven times to their right as explained below. Sets 2 and 4 are similarly related.

Explanation:  Cause and effect relationship

Explanation: There is a relation between all the letters when taken in series.

So JQKP should be the next series of letters that is not in the options.

Explanation: Former cannot be expected from the letter.

Directions (10 - 17): In the following questions, some groups of letters are given, all of which, except one, share a common similarity while one is different.

Explanation: All except Guwahati are capitals of states of India.

Explanation: The sum of first two numbers is the third number in a, b, c and e but not in d.

Explanation: Only option ‘a’ has a vowel. The rest don’t.

Explanation: The rest of the words are synonymous to each other.

Directions (18 - 17): What should come in the place of question mark (?) in the following alpha-numeric series?

22. In a certain code MANUFACTURE is written as ZBTDGBLMDPY. How is NATURE written in that code?

Explanation: Correct answer is option b)

24. In a certain code ‘SHIMLA’ is written as ‘RGHLKZ, how will PATNA be coded then?

Explanation: By the Given data , We have the expression:

27. What will come in place of question mark? 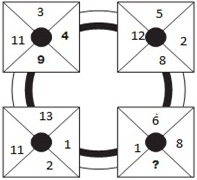 Explanation: In each square of the diagram, the sum of the numbers is always 27.

28. How many triangles and squares are there in the given figure? 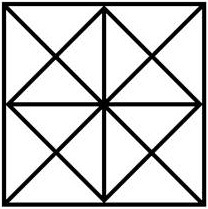 Explanation: There are 44 triangles and 10 squares.

29. Which number is inside the Square, Ellipse and Triangle? 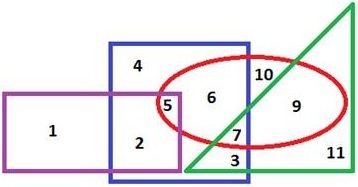 Explanation: According to the question, the direction diagram will be as follows:

So, Vinay is facing towards South.