Indian History is one of the essential sections of IAS Exam and IAS aspirant cannot ignore this subject during IAS preparation. Here, we have provided Medieval History quiz based on the topic Mughal Empire, very important for IAS Prelims Exam. 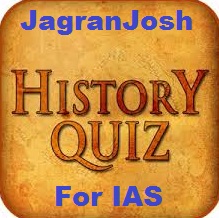 Here, in this article, we have provided Medieval History quiz for IAS Prelims Exam. Such questions are completely based on the UPSC IAS Exam syllabus and have a great possibility of asking in the upcoming IAS Prelims Exam.

1. Consider the following statements regarding Akbar’s relation with Rajputs:
I. Akbar married the Rajput princess, the daughter of Raja Bharamal which was considered as a turning point in the history of Mughals.
II. The Rajput policy of Akbar proved to be beneficial to the Mughal state as well as to the Rajputs.

The Rajput policy of Akbar was notable. He married the Rajput princess, the daughter of Raja Bharamal. It was a turning point in the history of Mughals. Rajputs served the Mughals for four generations. Many of them rose to the positions of military generals. Raja Bhagawan Das and Raja Man Singh were given senior positions in the administration by Akbar.

One by one, all Rajput states submitted to Akbar. But the Ranas of Mewar continued to defy despite several defeats. In the Battle of Haldighati, Rana Pratap Singh was severely defeated by the Mughal army led by Man Singh in 1576. Following the defeat of Mewar, most of the leading Rajput rulers had accepted Akbar’s suzerainty. Akbar’s Rajput policy was combined with a broad religious toleration. He abolished the pilgrim tax and later the jiziya. The Rajput policy of Akbar proved to be beneficial to the Mughal state as well as to the Rajputs. The alliance secured to the Mughals the services of the bravest warriors. On the other hand it ensured peace in Rajasthan and a number of Rajputs who joined the Mughal service rose to important positions.

2. Who among the following ruler had built the Purana Qila on the bank of Yamuna River?
a. Shah Jahan
b. Shar Shah Sur
c. Akbar
d. Humanyun

Sher Shah remained a pious Muslim and generally tolerant towards other religions. He employed Hindus in important offices. He was also a patron of art and architecture. He built a new city on the banks of the river Yamuna near Delhi. Now the old fort called Purana Qila and its mosque is alone surviving. He also built a Mausoleum at Sasaram, which is considered as one of the master pieces of Indian architecture. Sher Shah also patronized the learned men. Malik Muhammad Jayasi wrote the famous Hindi work Padmavat during his reign. After Sher Shah’s death in 1545 his successors ruled till 1555 when Humayun re-conquered India.

Although his rule lasted for five years, he organized a brilliant administrative system. The central government consisted of several departments. The king was assisted by four important ministers:

• Diwan –i- Wizarat– also called as Wazir- in charge of Revenue and Finance.

• Diwan-i-Ariz– in charge of Army.

Sher Shah’s empire was divided into forty seven sarkars. Chief Shiqdar (law and order) and Chief Munsif (judge) were the two officers in charge of the administration in each sarkar. Each sarkar was divided into several parganas. Shiqdar (military officer), Amin (land revenue), Fotedar (treasurer) Karkuns (accountants) were in charge of the administration of each pargana. There were also many administrative units called iqtas.

4. Consider the following statements regarding the military conquest of Babur, the founder of Mughal Empire in India:
I. On 21st April 1526 the first Battle of Panipat took place between Babur and Ibrahim Lodi, who was killed in the battle.
II. Babur occupied Delhi and sent his son Humayun to seize Agra and Babur proclaimed himself as “Emperor of Hindustan”.
III. In 1528, Babur captured Chanderi from another Rajput ruler Medini Rai.

Which of the following statement(s) is/are correct?
a. Only I
b. I and II
c. II and III
d. All of the above

On the eve of Babur’s invasion of India, there were five prominent Muslim rulers – the Sultans of Delhi, Gujarat, Malwa, Bengal and the Deccan – and two prominent Hindu rulers – Rana Sanga of Mewar and the Vijayanagar Empire. Once again by the end of 1525, Babur started from Kabul to conquer India. He occupied Lahore easily by defeating its governor, Daulat Khan Lodi. Then he proceeded against Delhi where Ibrahim Lodi was the Sultan. On 21st April 1526 the first Battle of Panipat took place between Babur and Ibrahim Lodi, who was killed in the battle. Babur’s success was due his cavalry and artillery. Babur occupied Delhi and sent his son Humayun to seize Agra. Babur proclaimed himself as “Emperor of Hindustan”.

His subsequent victories over Rana Sanga and the Afghans secured his position as the ruler of India. Rana Sanga of Mewar was a great Rajput warrior. He marched against Babur and in the Battle of Khanua (near Agra) held in 1527 Babur won a decisive victory over him. Babur assumed the title Ghazi. In 1528, Babur captured Chanderi from another Rajput ruler Medini Rai. In the next year, Babur defeated the Afghans in the Battle of Gogra in Bihar.

Humayun reached Agra to negotiate with his brothers. But as they were not cooperative, Humayun was forced to fight with Sher Khan alone in the Battle of Bilgram in 1540. This battle was also known as Battle of Kanauj. Humayun was thoroughly defeated by Sher Khan. After losing his kingdom, Humayun became an exile for the next fifteen years.