Practicing Mock Tests can help you in many ways in your exam preparation. So continue your preparation for General Intelligence and Reasoning Section with this 3rd Mock Test.

If practiced well, General intelligence and Reasoning can become one of the highest scoring sections of SSC CGL Tier-I Exam. For your practice, we have designed mock papers which will test your ability to think and solve problems. The questions asked in this section are mainly the brain teasers and sometimes can be quite tricky to answer.

So, let’s start the practice with the 3rd General Intelligence & Reasoning Mock Test. You must try to finish all the 25 questions within 20 minutes time duration. After attempting all the questions, you can assess your performance by checking answers alongwith their solutions given latter in this article.

3. Out of the four options given below, three are of a kind while one does not belong to the group. Choose the one which is unlike the others.
a) Just
b) Fair
c) Favorable
d) Equitable

6. Given question have some statements and some conclusions. Choose the conclusion that logically follows:
Statements: Some shows are plays. No play is theatre. All theatres are movies. Some movies are dramas.
Conclusions:

Direction (10-11): Study the following arrangement of the English alphabet and answer the questions given below.

10. Four of the following are alike in a certain way based on their position in the above arrangement and hence form a group. Which one does not belong to that group?
a) YIB
b) SCR
c) VXM
d) LNI

11. Which letter is tenth to the right of the letter which is exactly the middle letter between U and W?
a) W
b) T
c) S
d) None of these

12. In a group of 42 boys, Kamal is placed seventh from the bottom whereas Suraj is placed ninth from the top. Manish is placed exactly in between the two. What is Kamal’s position from Manish?
a) 7
b) 9
c) 12
d) 13

14. Arrange the following in a logical order :

15. Arrange the given words in a logical order:

What is the missing number in the given matrix?

18. Select the missing number from the given responses.

19. The following question has one statement followed by two conclusions. Read and understand them carefully and then select your answer option as given below.
Statement: Bureaucrats marry only intelligent girls. Gudiya is very intelligent.
Conclusions:

21. Choose the alternative which is closely resembles the mirror image of the given combination.
INFORMATIONS

22. Find out the alternative figure which contains figure (X) as its part.

23. Find out the alternative figure which contains figure (X) as its part

24. Find out from amongst the four alternatives as to how the pattern would appear when the transparent sheet (X) is folded at the dotted line.

25. Which of the following finished patterns can be obtained from the piece of cardboard (X) shown below?

1. Answer (c)
Explanation: - A doctor “examines” a patient, whereas a teacher “teaches” students. 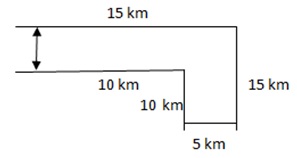 14. Answer (b)
Explanation: All the given words stand for 'Joy', but the intensity increases in the order - Ambivalence, Happiness, Pleasure, Euphoria, and Ecstasy. Hence, the correct order is 3, 2, 5, 1, 4.

19. Answer: (d)
Explanation: The data does not mention whether all intelligent girls are married to bureaucrats. So, either I or II may follow.

21. Answer (b)
Explanation: Correct answer is option b)

24. Answer (b)
Explanation: Correct answer is option a)

25. Answer: (b)
Explanation: The pattern on figure (X) and also the fact that the faces are rectangle, indicate that only figure (b) can be obtained by folding figure (X).

The difficulty level of the above mock test was ranging between easy to moderate level and a good score would lie between 20 to 23 marks. Don’t stop your practice until you achieve efficiency and accuracy. Try another mock test here – General Intelligence and Reasoning Mock Test.