Staff Selection Commission is all set to hold Combined All India Open Examination for recruitment to the posts of Data Entry Operator and Lower Division Clerk. The minimum qualification to appear for SSC Higher Secondary Exam is 12th pass or equivalent. The eligible candidates can apply through prescribed format before 16 August 2013. 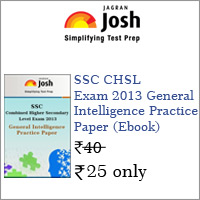 Vacancies in the post of Data Entry Operator & Lower Division Clerk will be determined in due course.

Candidate should have passed 12th Standard or equivalent or higher examination from a recognized Board or University. The Candidates who have not acquired/will not acquire the educational qualification as on 01 August 2013 will not be eligible and need not apply.

• The amount of Rs 100 (One Hundred Only) will be payable as application fee.
• The candidates submitting Paper application should pay the fee by means of "Central Recruitment Fee Stamps (CRFS)"only.
• The candidates submitting their applications on line should pay the requisite fee only through State Bank of India in the form of challan or through SBI Net Banking. Women candidates and candidates belonging to Scheduled Caste, Scheduled Tribe Physically Handicapped and Ex - serviceman eligible for reservation are exempted from paying fee.