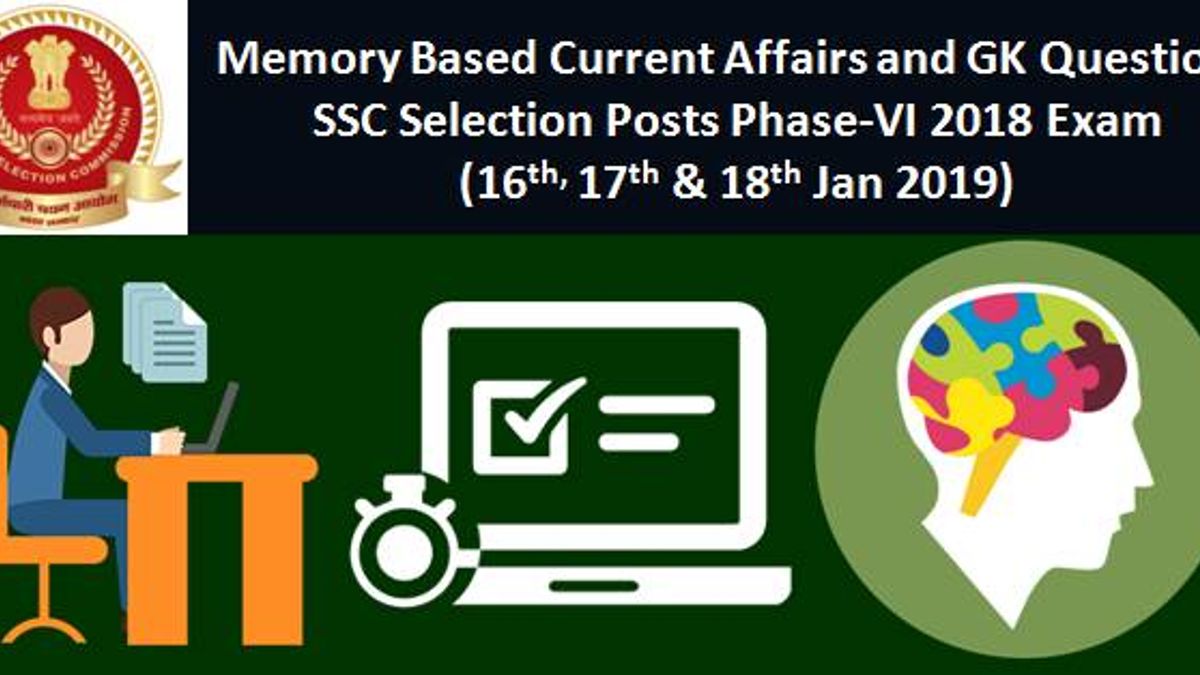 SSC Selection Posts Phase-VI 2018 Exams have been started from 16th January 2019 and will last till 18th January, 2019. In this article we are going to share the most important memory based Current Affairs and GK Questions as per the feedback received by the candidates who have appeared for SSC Selection Posts Phase-VI Exam this year. Candidates are advised to definitely cover these questions for scoring high marks in the Exam.

Let’s have a look at the Important Current Affairs and GK Questions that are being covered in the SSC Selection Posts Phase-VI 2018 Exam:

Q1: Where was International Science Festival 2018was held in India?

Ans: Lucknow - The 4th India International Science Festival 2018 (IISF 2018) was organized by Ministry of Science and Technology with other partners from 5-8 October in Lucknow, India.

Q2: Who is the Vice President Of USA?

Q3: What is the Population Wise Rank of Haryana in India?

Q4: Who is the Prime Minister of Uganda?

Q5: When was Virat Kohli Born?

Q6: Maria Fernanda is related to

Q7: Who is the Director of the movie ‘Village Rockstar’?

Q8: Atal Bihari Vajpayee was elected as Lok Sabha Member from which State?

Q12: Where was Vikramshila University located?

Answer: The Vikramshila University remains are located near Antichak in Bhagalpur district of Bihar.

Q13: In which state Bansagar Dam is located?

Q14: Hornbill Festival is celebrated in which state?

Q15: Headquarter of Spice Board of India.

Q17: Which year is the Sikkim Foundation year?

Q19: Which Article of Constitution is for abolition of untouchability?

Q20: Which of the following is not one of the Indus Valley Civilization Sites?

Q21: Which country is the largest producer of saffron?

Q22: Queensberry rule is associated with which game?

Q23: When was Battle of Chausa was fought?

Q25: Where is Chabahar Port located?

As per the feedback shared by the candidates who have appeared this year for SSC Selection Posts Phase-VI Exam, the questions asked in general awareness section were of  Easy to moderate level. Candidates are advised to go through the above questions thoroughly for scoring high marks in this section.