At a glittering ceremony at its Kattankulathur Campus, SRM University conferred the Doctor of Literature (Honoris Causa), on Mr. Munjal. He was honored with the D.Litt degree for his contribution to education, business and humanity at a Special Convocation. 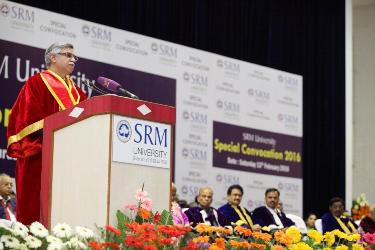 In the history of India there is no question of the fact that we have had notable educators and educationists; but there are enormous challenges in the realm of education today. “The reach is not enough and the mass of the reach is not working to quality expectation. We have to hone in on the realities of what is around us” said Mr. Sunil Kant Munjal, Joint Managing Director of Hero Moto Corp, the world’s largest motorcycle manufacturing company at SRM University.

At a glittering ceremony at its Kattankulathur Campus, SRM University conferred the Doctor of Literature (Honoris Causa), on Mr. Munjal. He was honored with the D.Litt degree for his contribution to education, business and humanity at a Special Convocation.

“We need to generate some one million jobs every month for the next 15 years; we also know that there are 250 million people who do not have two meals a day. We have to make the difference to reach out” the top industrialist said while delivering his acceptance speech. “Forty one per cent of Indian economy is external economy. We must continue to strengthen the local economy so that Indian can go forward”, he added. “We need to produce thousands of new leaders every year not just in sciences and technology but also in the liberal arts”, he said. “We need to be research thinkers, design thinkers and innovators” he added.

A forward looking thinker who goes beyond narrow confines of his group, Mr. Munjal has been credited with ideas and innovation that continues to benefit India. Seen as one of those industrial icons of the country who actively pushed for the acceleration of India’s economic reforms, Mr. Munjal consistently played a major role in evolving a mutually beneficial partnership between government and industry. 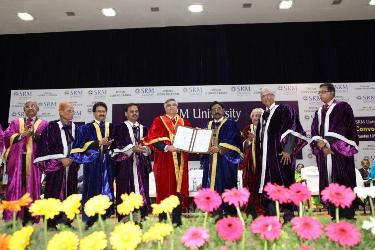 Mr. Munjal’s interest goes much beyond business and industry—he has placed education as one of his high priorities in the hope that the youth of India will soon push the country into a superpower of knowledge. Mr. Munjal has left a mark in the Indian educational map through the BML Educorp Services, a not-for-profit university initiative, and being the intellectual and guiding force of the BML Munjal University.

“It is a high honor for SRM University to confer the D.Litt on such a multi-faceted personality who has contributed not only to Indian industry and business but also to the cause of socio-economic development of the country as a whole”, said the Vice Chancellor of SRM University, Prof. Prabir Bagchi.

The Founder Chancellor of SRM Educational group, Dr. T.R. Paari Vendhar presided over the Special Convocation. “We are enthused and encouraged in having the presence of Mr. Munjal. To students these kinds of personalities need to be introduced for them to be inspired and motivated. The interest of becoming an entrepreneur begins now” the Founder Chancellor said in his welcome address.