The BPSC conducts exams for different administrative posts and students who qualify for the exam are recruited as administrative officers. The posts of the SDM and DSP bring professional growth and personal satisfaction. The job also offers a challenging perspective during its life cycle. 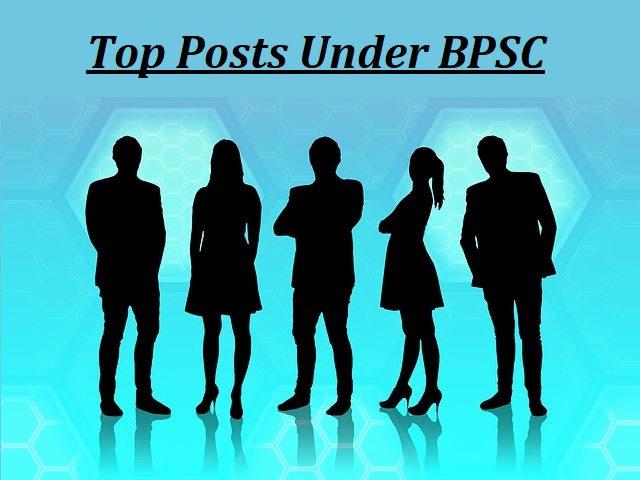 The top posts that BPSC offer include Bihar Administrative Service, Bihar Police Service, and Bihar Financial Service. The aspirants are always keen to know what the posts are to be offered once they get through the selection process. In this article, we are going to discuss the top posts offered by the BPSC.

Top Posts Offered by the BPSC

The BPSC conducts the exam for multiple posts which depends upon the number of vacancies received by the Commission from the various departments of the government. The candidates who are eligible as per the rules of the recruitment are asked to apply for the posts and then they are put to the screening test, main exam, and interview. The Commission will hold the exams and prepare the final merit list in which the candidates are allotted the posts as per their performance in the exam. Here is the detail of some top posts that are offered by the BPSC:

Salary and Promotion of SDM in BPSC

The post under the administrative service is full of responsibilities. The Officer is responsible for the day to day activities in his area. He may have to be on the call of duty even at night as the situation may be demanding at times. If the Officer is posted in a sensitive area then he has to be more alert. This is a very demanding job. Under these posts, the candidates are appointed as Circle Officer, Senior Deputy Collector in the state.

After the posts of the administrative services, the second most responsible post is that of the DSP who is the second in the ranks of the department. Under these posts, the candidates are appointed as Deputy Superintendent of Police (DSP) whose responsibility is to monitor the law & order in the area. He ensures the smooth functioning of the police department. He has to be on the calls of duty all the time as he is solely responsible for the maintenance of the law and order in his area.

Finance is the backbone of any state and the government has to take care of it that there is no irregularity in the financial operation. The Officer needs to be very careful in performing his duties. The job demands more of care than decision-making in its performance. Under these posts, the candidates are appointed as Commercial Tax Officer. The Officers are supposed to ensure the tax collection of the government and look at all the related affairs.

The state makes or manufactures many kinds of products in the industry. The BPSC appoints many Officers as Product Inspector who look after the affairs related to commodities and the products in the state under his jurisdiction. The Officers are required to oversee the activities of the manufacturing and quality assurance in his state. He needs to be on watch all the time as there can be chances of malpractice.

Every government looks after its rural areas well as the state does not want to leave the rural area behind in terms of development. The BPSC, in the same pursuit, appoints the Officers as Rural Development Officer so that the developmental activities can be made possible in the rural area. The Officers implement the initiatives that are run by the government for the welfare of the rural folks. This job gives an opportunity to remain in touch with the rural area.

Salary and Promotion of DSP in BPSC

The government always wants to generate ample job opportunities for its people. The jobs are required by the people for their living and so the BPSC recruits Employment Officer who heads the department that is responsible for the matters related to employment in his area. He will make the data available to the government as to how many unemployed are there in his area. This helps in the proper planning of the resource distribution in the state.

The state has industrial settings and manufacturing units. Many people work in these set-ups. The rights of these people must be protected by law. The BPSC recruits the Labour Officers to look after such matters. They are like the Appealatte authority who hears the complaints of the people and redresses them. The Officers will be responsible for planning, implementing, and looking after the affairs related to labor laws in his area.

Sugarcane is one of the major crops that the farmers frow in their fields as commercial crops. The government has to look after their issues and help them in resolving them. A sugarcane Officer will be responsible for the implementation of the schemes brought for the farmers of sugarcane. He will help the government agencies in procuring the MSP and other related things. He will lead the campaign of awareness that is related to the sugarcane farmers.

The posts mentioned above are allotted under BPSC. The Officers are the Head of the Office and take all the related decisions. There are chances of promotion in almost all the posts. There are Senior level opportunities in these posts and candidates should be ready to get these responsibilities.

All the above-mentioned posts commensurate with good pay and perks, social status, and major responsibilities. All these posts are offered on the basis of the final merit list of the selected candidates and the choice they made at the time of the selection process. Candidates can choose the posts as per their interests, but the final allotment is done by the Commission based on merit.