The Economic Survey 2016-17 has been released now. Every year the Economic Survey contains new terms and concepts. UBI is one such concept explained in detailed in this article, quite useful for IAS preparation. 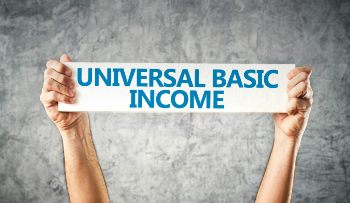 Economic Survey 2016-17 has emphasised to embrace the idea of Universal Basic Income (UBI) in place of the subsidy-based schemes.  It has proposed UBI as a long-term solution to ease poverty in the country which will guarantee that every citizen has a right to a minimum income to cover their basic needs and necessity. The concept of UBI has now become popular among both types of scholars of the extreme Left and the Right.

A web definition suggests that a basic income is also called as unconditional basic income, basic income guarantee, citizen's Income, universal basic income or universal demogrant is a for social security is a form of social security in which all citizens or residents of a country regularly receive an unconditional sum of money, either from a government or some other public institution, in addition to any income received from elsewhere. The concept of UBI should not be confused with the concept of minimum wage or living wage; both are quite different concepts from each other.

Why UBI is important?

Universal Basic Income is an essential and compelling paradigm shift in thinking about both social justice and a productive economy as a whole. The idea of UBI postulates that a just society needs to make sure to each individual a minimum income which they can count on, and which provides the necessary material foundation for a life with access to basic goods and a life of dignity.

UBI is like a test of a just and non-exploitative society. UBI has potential to fix the following issues of just and unjust in the society:

Arguments in Favour and Against UBI

Plight of UBI proposal in other countries of the world

As it appears to be the case for the country like India, UBI will be a more powerful idea for the implementation of its welfare schemes and it will have juxtaposition for both the thinkers of the Left and the Right. For the adoption of UBI in India, Aaadhar will play a significant role in identifying the citizens, but it is unable to identify the required issues. So, it is very important to recognise that universal basic income will not diminish the need to build state capacity- the state will still have to enhance its capacities to provide a whole range of public goods. UBI is not a substitute for state capacity, but it is a way of ensuring that state welfare transfers are more efficient so that the state can concentrate on other public goods.

Another drawback of UBI is that it considers the individual only and not the household as the unit of the beneficiary. This will enhance the case of an agency, especially in the case of women within households. The government should work in this part to avoid agency in the thread.