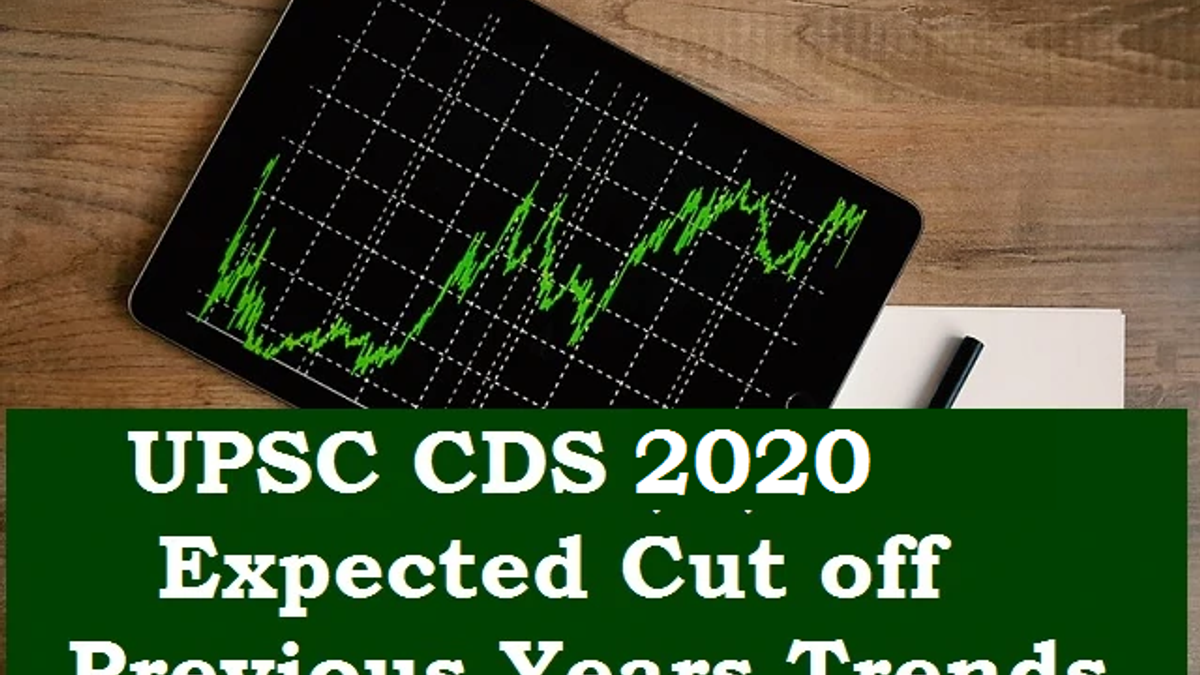 UPSC CDS Cut Off 2020: UPSC conducted the CDS 2 2020 Exam on 8th November 2020 amid the COVID-19 pandemic. Candidates who will be able to fetch the cut off marks in the exam will get into the merit list for their selection in courses carried out by Indian Military Academy, Indian Naval Academy, Officers Training Academy and Air Force Academy.  CDS Cut off 2020 is released on the basis of the difficulty level of exam and the total number of vacancies. UPSC releases the cut off marks along with the CDS Exam Result. The Cut off marks are decided on the basis of various parameters such as total number of CDS vacancies, number of candidates appearing for the exam, and difficulty level of the question paper.

Earlier, the UPSC released the UPSC CDS 2 2019 Cut Off Marks @ upsc.gov.in for the Combined Defence Services (CDS) 2019 Exam. The CDS Cut off contains the marks for IMA, INA, AFA and OTA courses. As per the official CDS Cut off 2019, candidates were required to obtain minimum 20 % qualifying marks in each paper of CDS Written Exam. PDF Download official CDS 2 2019 Cut off here for IMA/INA/OTA/AFA and know the marks obtained by the last recommended candidates for admission to the Combined Defence Services by the Union Public Service Commission (UPSC). Also. have a look at the UPSC CDS Expected Cut off 2020 below along with the previous years trends.

A total of 340 Multiple Choice Questions are asked in the CDS exam from sections General Knowledge, English Language and Elementary Mathematics. Candidates who opted for Indian Military Academy, Indian Naval Academy, and Air Force Academy courses attempted questions from all the sections in the exam. On the other hand, candidates who applied for Officers Training Academy course attended only two papers - General Knowledge & English. Candidates who would clear the CDS Written Exam after securing the CDS Cutoff marks will be qualified to appear for the next round that is SSB Interview. It is mandatory for the candidates to secure the sectional cut off as well. Candidates who are waiting for the CDS 2020 Cut off marks can check here the expected cutoff. 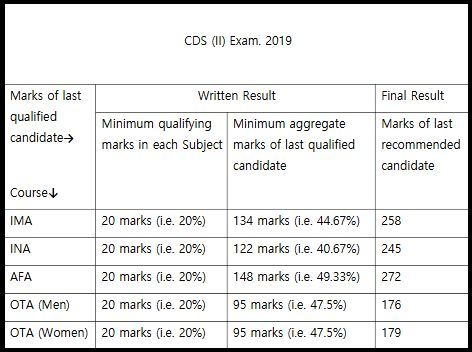 UPSC will release the official CDS cut off along with the declaration of CDS Result. The CDS cutoff is released separately for the courses conducted by IMA, INA, AFA and OTA. The written exam of CDS is of total 300 marks and each section is 100 marks. The minimum qualifying marks of each section are 20% of the total marks. Going by this, it becomes compulsory for candidates to score a minimum of 60 marks to qualify the exam. However, the merit list is prepared on the basis of cut off marks. Candidates need to score above the minimum qualifying marks to get a good rank in the merit list. The official cut off marks is not available as of now. Check here the expected cut off of the CDS Exam 2020.

Trends in the Cut off Marks of CDS Examination

Here we have provided the graphical representation of the trends seen in the cut off marks of the written CDS Exam. Have a look: 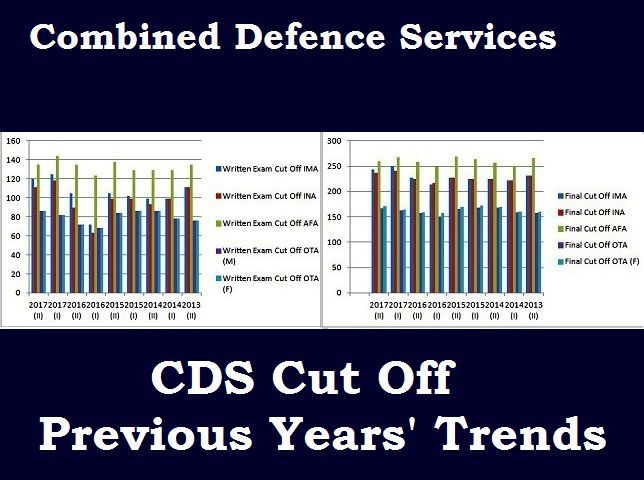