The Civil Services Mains 2015 Exam for History Paper I (Optional) was held on 23rd December 2015. Here we have provided IAS Main History (Optional) Question Paper I with the Map

(x)   A site of ancient cave-paintings 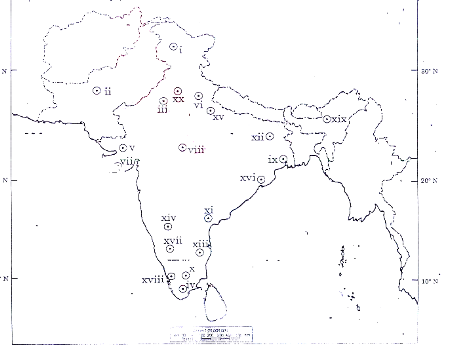 Q2.    (a) How far can the ancient Indian Shruti literature be used as historical sources. 20 Marks

(b) The decline of Harappan civilization was caused by ecological degradation rather than external invasion. Discuss. 15 Marks

Q3.  (a) How far it correct to say that changes in the post Vedic economy gave birth to new religious movements in India? 20 Marks

(b) Delineate the nature and impact of India’s contact with Western Asia and the Mediterranean world during the Mauryan period. 15 Marks

(c) “Not only does ancient Tamil literature furnish an accurate picture of widely disparate classes, it also describes the social condition of Tamil country as it was” Discuss. 15 Marks

Q4.  (a) Trace the role of guilds and trade organisations in the development of early Indian economy. 15 Marks

(b) Kailasa temple built at Ellora marks the culmination of rock-cut architecture in India. Elucidate. 15 Marks

(c) How could the local self-government under the Cholas adjust with their centralised administrative structure? 20 Marks

(a) Give a brief account of the early medieval temple architecture of Kashmir.

(b) Why is Mamallapuram famous?

(c)  Mention the salient features of the polity of Vijayanagara Empire under Krishnadevaraya.

(d)  What measures did Balban adopt to combat the Mongol menace?

(e)  How does Tuzuk-i-Babri testify that Babar had been a cultured man?

Q6.    (a) Do the evidences of land ownership at our disposal support the theory of the prevalence of feudalism in early medieval India? 15 Marks

(b) Discuss in brief the land-revenue –system and judicial administration of The Delhi Sultanate. 15 Marks

(c) “Sufis and medieval mystic saints failed to modify either the religious ideas and practices or the outward structure of Islamic/Hindu societies to any appreciable extent. Comment for/against. 20 Marks

Q7.  (a) Make an estimate of Rana Kumbha as a patron of literature and art. 20 Marks

(b) Why should the sixteenth century be regarded as the period of the Indian Renaissance? 15 Marks

(c) “Tantrism, if not in practice, at least on conceptual level challenged patriarchy” Examine Tantrism specially keeping in mind the above context. 15 Marks

Q8.   (a) “In medieval Indian history Akbar was unique for his religio-political ideas and policies.” Analyse this statement. 20 Marks

(b) Will it not be correct to say that the rural economy in Mughal India was relatively? Self-sufficient? 15 Marks

(c) Compare the Peshwas’ bureaucratic management with that of the Imperial Mughal administration. 15 Marks