Check below 10 important questions on the decline of the Mughal Empire topic of Modern History syllabus for UPSC IAS Prelims exam 2021. 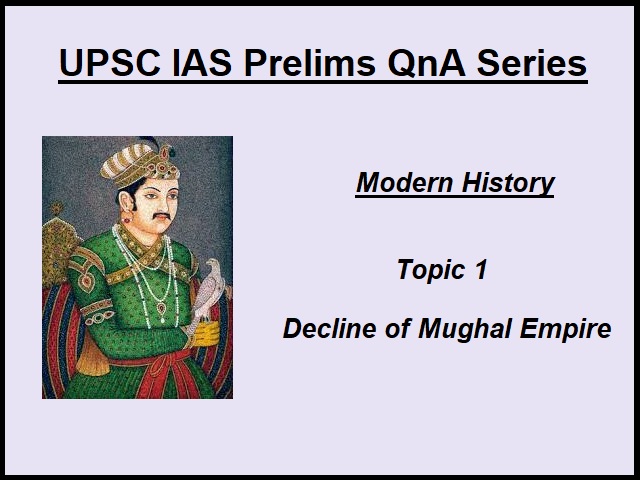 UPSC Prelims 2021: The Mughal Empire declined quickly after the passing of Aurangazeb. The attacks of Nadir Shah and Ahmad Shah Abdali debilitated the Mughal Empire. The weakening of the Mughals also helped the Europeans to expand their empire in the country. The topic is important from the Prelims perspective and aspirants should study each part in detail. Once through the preparation, you can solve mock tests and quizzes to test your preparation. Below we have provided 10 important questions from the Decline of the Mughal Empire topic of Modern History. Questions are accompanied by the correct answer and an attached explanation. Aspirants can solve these topic-wise important questions to test their preparation level.

Ques 1: Who among the following Mughal Emperor became the first pensioner of the East India Company?

Ques 2: 3The famous Koh-i-nur / Kohinoor diamond was taken away from India in 18th

century, during the invasion of Delhi by

Ques 3:  In Mughal administration the practice of “Ijarah” was

b) Appointment of hereditary military officers

c) Farming the land revenue to the highest bidder

d) Reserving the best lands for King’s own treasury

Ques 4:  Which of the following statement is the correct explanation of the Mansabdari system?

b) A syncretic religion, which stressed loyalty to the emperor.

c) A military organization of the aristocracy, its basis primarily being personal loyalty to the emperor.

d) Reserving the best lands for King’s own treasury

Ques 5: Which of the following were causes of the downfall of the Mughal Empire?

Select the correct answer using the codes below:

b) Raj Singh, Ruler of Mewar

Ques 8: Which of the following is/are correctly matched?