Check most important questions on the major seas of the world. Aspirants of UPSC Civil Services Prelims 2021 exams can solve these questions to test their knowledge of World Geography. 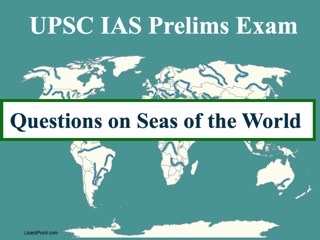 In terms of geography, Seas are smaller than oceans and are usually located where the land and ocean meet. Typically, Seas are partially enclosed by land. Seas have great geographical, Political, and Economical significance. Seas of the world are an important part of the UPSC prelims Geography syllabus and aspirants should revise the topic with clarity. Studying this topic with the help of maps can be helpful. Aspirants can check here some important questions based on the important marginal seas of the world.

Ques 1: Which of the following countries does not have a coastline with the Mediterannean Sea?

Ques 2: Which of the following is an inland sea?

Ques 3: Which of the following water bodies is landlocked by North Korea, South Korea and China from three sides?

Ques 4: Which of the following water bodies was historically known as the Burma Sea?

Ques 6: “While all other seas in the world are defined at least in part by land boundaries, this Sea is defined only by ocean currents.”

Which water body is being discussed in the above statement?

Ques 7: Which of the following sea are part of the Pacific ocean?

Ques 8: Which one of the following countries do not have a coastline with the caspian sea?

Ques 9: Sea of Okhotsk lies in:

Ques 10: The Irish Sea is a marginal sea of: