Why do the dogs possess a far better sense of smell than the human beings?

In this article you will come to know about the reason that why do the dogs possess a far better sense of smell than the human beings.

Q. Why do the dogs possess a far better sense of smell than the human beings? 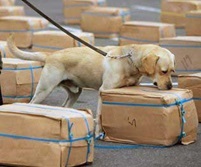 Ans. Dogs can smell 100,000 times better than humans. The reason for such strong sense of smell in dogs lies in the fact that their snouts are provided with about 200 million scent receptors. While in case of humans the number is only 5 million. The moist, leathery surface of the dog’s nose also acts as a contributing factor to its olfaction. This moisture along with the act of sniffing helps to attract and hold the scent molecules, which then travel up to the scent receptors inside the nose. Also, compared to the humans, dogs have a larger portion of their brain dedicated to olfaction.