Why does milk rise up on boiling, but water doesn’t?

In this article you will come to know about the reason why does milk rise up on boiling, but water does not.

Q. Why does milk rise up on boiling, but water doesn’t? 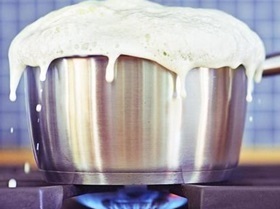 Ans. Milk contains about 87% of water and its remaining part constitutes proteins, fats, and sugar. As the milk is heated, the water in its structure starts converting into vapour and the fats and proteins get separated which being lighter form a creamy layer at the top. The rising water vapour gets trapped below this layer. On further heating of milk, the water vapour expands and creates enough pressure to raise the thick creamy layer and escapes out causing the  milk to spill down. In case of water, there is no such layer on its surface that traps water vapor. Hence the vapor keeps on escaping as soon as it is formed.