This mosque lies on the southern periphery of the village Khirki, New Delhi. The mosque was built by Khan-i-Jahan Junan Shah, the Prime Minister of Firoz Shah Tughluq (1351-88) and is believed to be one of the seven mosques built by him. 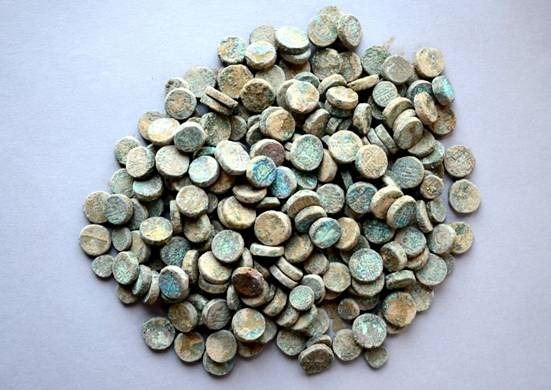 The Archaeological Survey of India (ASI) discovered a collection of 254 Copper Coins in the premises of Khirki Mosque during the course of conservation of the monument.

This mosque lies on the southern periphery of the village Khirki, New Delhi. The mosque was built by Khan-i-Jahan Junan Shah, the Prime Minister of Firoz Shah Tughluq (1351-88) and is believed to be one of the seven mosques built by him.

• Post the discovery of coins, immediately, a team of archaeologist, consternation assistant and photographers came to the site and took the hoard of coins under their possession.

• Few coins got cleaned by the experts of Science of Branch of ASI; and on the basis of preliminary observation, it was found that some of the coins belong to the reign of Shershah Suri and his successors.

• After cleaning of the coins process to decipher the same will be initiated with the help of experts.

• Earlier in the year 2003, a hoard of 63 Coins was found from the same premises during cleaning and conservation.

• Built with rubble stone, the Khirki Mosque is double-storeyed.

• The lower storey consists only of a series of basement cells.

• Untidy bastions occupy its four corners, imparting it the look of a fortified building.

• The gateways of three sides, except on the west, are edged by narrowed minarets; the main entrance is from the east.

• Corresponding with the openings of cells on the lower storey, the upper storey contains holed windows (khirkis), which have given it its present name.

• The pillared courtyard is divided into twenty - five squares, five on each side, each square consisting of nine smaller squares.

• The larger squares, together with the square in the centre of the courtyard, are each covered with a cluster of nine small low domes.

• Among the remaining squares, four on the diagonals are left uncovered to admit light, while the others are covered with flat roofs.

• This ingenious way of covering the courtyard is repeated only in one other mosque erected by the same builder. These two are the only examples of closed mosques in northern India.