Asma Jahangir will be remembered for her services towards building a democratic and more inclusive Pakistan. She was the first woman to serve as the President of the Supreme Court Bar Association in Pakistan.

Her daughter Munizae Jahangir received the award on her behalf at the award ceremony that took place at the UN Headquarters in New York, as part of activities to celebrate Human Rights Day. 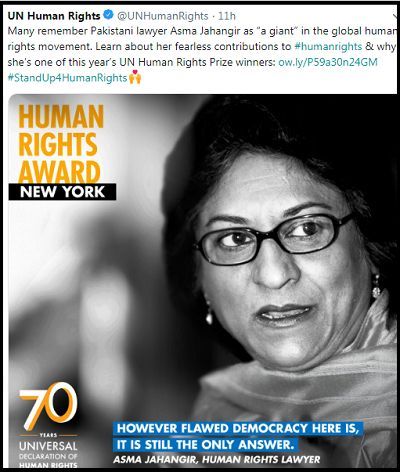 Asma Jahangir passed away on February 11, 2018 due to cardiac arrest. She was known for her outspoken nature and unrelenting pursuit for human rights.

This year, the award coincided with the 70th anniversary of the Universal Declaration of Human Rights.

Earlier in October 2018, Asma Jahangir was announced as one of the four winners of this prestigious prize. Other winners were women's rights activist of Tanzania Rebeca Gyumi; activist for the rights of indigenous Brazilian communities Joenia Wapichana and Ireland's human rights organisation ‘Front Line Defenders’. 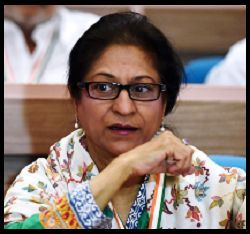 • Asma Jahangir will be remembered for her services towards building a democratic and more inclusive Pakistan.

• She was the first woman to serve as the President of the Supreme Court Bar Association in Pakistan.

• She was the founder of a home-grown human rights movement in Pakistan, and co-founded and served as Chairperson of Human Rights Commission of Pakistan.

• During her tenure at the UN Human Rights office, Jahangir served various roles such as an expert in the Investigation on Sri Lanka; a member of International Fact-Finding Mission on Israeli Settlements in the Occupied Palestinian Territory; and a trustee of the UN Voluntary Trust Fund.

• She also served as the UN Special Rapporteur on the situation of human rights in the Islamic Republic of Iran.

• Jahangir had also won numerous international awards in recognition of her work including the Martin Ennals Award in 1995, and the UNESCO/Bilbao Prize for the Promotion of Culture of Human rights.

• She was honoured as an Officier dans l’Ordre national de la Légion d’honneur by France.

• The About UN Human Rights Prize is an honorary award given to individuals and organisations in recognition of outstanding achievement in human rights.

• The award was established by the UN General Assembly in 1966.

• The award was first conferred in December 1968, marking the twentieth anniversary of the Universal Declaration of Human Rights.