Ayodhya Verdict Out: All you need to know; Timeline of key events

Supreme Court has delivered the Ayodhya Verdict. The long-disputed land goes in favour of Ram Lalla, paving the way for construction of Ram Temple. 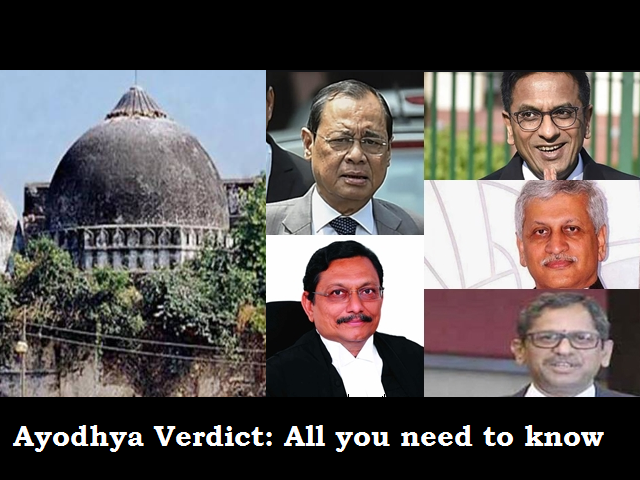 Ayodhya Land Dispute Verdict has been delivered! The Supreme Court’s 5 judge constitution headed by CJI Ranjan Gogoi delivered its judgment in the Ayodhya Ram Janmabhoomi-Babri Masjid land dispute case. The Bench has unanimously ruled in favour of the construction of Ram Temple on the land claimed by Sunni Waqf Board/Ram Lalla/Nirmohi Akhara. Check below the complete timeline of events that had built up the Ayodhya land dispute case.

Ahead of the verdict, the government had tightened up security arrangements across the country to avoid any unforeseen incident post the announcement of historic judgement. Prime Minister Narendra Modi-led Government imposed Section 144 across various states. Moreover, Schools and Educational Institutions of Uttar Pradesh, Delhi, Karnataka and other states were closed to ensure protection and safety of students.

Lutyens’ Delhi under Section 144: Besides the deployment of police personnel in Delhi; Section 144 of CrPC was imposed in Lutyens’ Delhi. The Delhi Police also kept an eye on the social media platforms to maintain law and order in the state.

Arrangements made ahead of Ayodhya Verdict

• Over 12000 troops have been deployed in Uttar Pradesh.
• Drones and CCTV Cameras have been deployed to monitor the situation post the pronouncement of Supreme Court judgment.
• All schools and Colleges to be closed in UP, Delhi, Karnataka, Madhya Pradesh and Rajasthan
• Jammu & Kashmir: Section 144 of the CrPC has been imposed in Jammu and Kashmir ahead of the Ayodhya Verdict.
• Prime Minister Narendra Modi, Uttar Pradesh CM Yogi Adityanath appealed to the people to maintain peace across the country.

The bench has reserved its judgement on October 16, 2019 after conducting a marathon hearing of 40 days.

1885: The Ayodhya land dispute dates back to 1885 when the first-ever suit was filed during the British Rule by Mahanth Raghubar Das to construct a Ram Temple at Ayodhya.

1949: The next major incident that took place was in December 1949, when idols of Lord Ram were found inside the Babri Masjid. Following which, the land was attached under Section 145 of the Code of Criminal Procedure.

1950: (Suit 1) After India’s independence, the first Ayodhya lawsuit was filed in January 1950 by Gopal Sing Visharad, claiming that he saw footprints of Lord Ram in the property. Though Visharad died and the case was substituted then to his son Rajendra Singh in 1986.

1959: (Suit 3) The Nirmohi Akhara of Ramanandi Varagis filed the second case in 1959, claiming its right over the Ram Janmabhoomi – the inner courtyard and constructed portion of the mosque.

1961: (Suit 4) The UP Waqfs Sunni Board was the third to file the lawsuit, claiming that the land belongs to Muslims and it should be given back to them after the removal of idols.

1992: In December 1992, dozens of right-wing activists demolished the Babri Masjid mosque, built by the Mughal Emperor Babur over 433 years ago. Over 2000 people died in the riots that shook all of India. The dispute is over 2.77 acres of land in Ayodhya.