The BRICS Foreign Ministers’  meeting was convened to discuss the COVID-19 crisis, its impact on international relations and response of the BRICS nations. 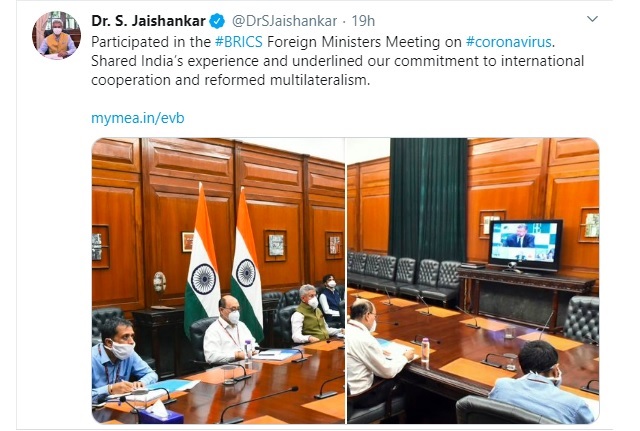 The BRICS Foreign Ministers’ video conference was convened to discuss about the COVID-19 crisis, its impact on international relations and response of the BRICS nations. The Ministers also discussed the activities to be undertaken under Russia’s BRICS chairmanship.

• The BRICS nations agreed to allocate $ 15 billion to the New Development Bank (NDB) so that it could set up a special loan instrument to support the revival of economies and help meet the emergency expenses incurred for responding to the coronavirus pandemic.

• The BRICS nations further held discussions on ways to step up cooperation within the bloc to contain coronavirus pandemic, as well as to revive the economies that have received a major blow due to the travel restrictions and lockdown imposed in most countries to curb the spread of coronavirus.

• Indian Foreign Minister S Jaishankar underlined the need for reforms in the multilateral systems and stated that this was the way forward.

• The bloc reiterated its support towards the World Health Organisation, stating that it is a very important and unique platform, which employs the best professionals from around the world, including from the US.

• Chinese Foreign Minister Wang Yi called on all the BRICS nations to firmly stand by multilateralism, by the international system centred around the United Nations and by the purposes and principles of the United Nations Charter.

• The Indian external affairs Minister, S Jaishankar noted that BRICS, which brings together almost 42 percent of the global population with impressive growth, investment and trade share, has a significant role to play in shaping the global economic and political architecture, especially in the current COVID-19 hit scenario.

• The Minister highlighted the various decisive steps taken early by India to combat the coronavirus pandemic including the launch of Pradhan Mantri Garib Kalyan economic package for the poor and vulnerable and Aarogya Setu Citizen App.

• The Minister highlighted that India had set up measures to check coronavirus even before it was declared a public health emergency of international concern by WHO.

•Further, the Indian Foreign Minister informed the BRICS nations about the coordinated efforts to contain COVID-19 in South Asia including the creation of COVID-19 Emergency Response Fund by the SAARC nations.

• India is also playing a major role in combating coronavirus across the world by exporting the key drug hydroxychloroquine to the countries in need. India is providing pharma assistance to nearly 85 nations, including many African countries on a grant basis, to support their response to the coronavirus pandemic.

• While highlighting the great risk posed by the pandemic to the health and well being of the people as well as the global economy, the Indian External Affairs Minister pointed out that the traditional medicine systems to strengthen immunity should be recognised and BRICS nations should support the efforts.

• S Jaishankar further stated that the current challenges underline the need for reforms of the multilateral systems.

The New Development Bank (NDB) was set up by the BRICS nations to support public or private projects through loans, guarantees, equity participation and other financial instruments.