World reaction to Chandrayaan 2: ESA Director General Johann-Dietrich Worner applauded ISRO’s great effort and said that he hoped that ISRO’s attempt to communicate with the Vikram Lander will soon be successful.

World reaction to Chandrayaan 2: Chandrayaan-2’s lander module, Vikram lander was scheduled to make its historic moon landing near the Moon’s South Pole in the early hours, between 1.30-2.30 am of September 7. Few seconds before the final touchdown, ISRO's Mission Control Centre lost contact with the Vikram Lander. Despite the setback, world leaders and foreign space agencies including NASA applauded ISRO for its Chandrayaan 2 mission achievements.

Vikram Lander had successfully begun its powered descent, the rough breaking phase had ended and the fine braking phase had begun. However, communications were lost mere seconds before the final landing. ISRO issued a statement saying that Vikram Lander’s descent was as planned and normal performance was observed up to an altitude of 2.1 km. Post that, the lander communication to the ground stations was lost.

ISRO had issued another statement saying that #Chandrayaan2 mission was a highly complex mission that represented a significant technological leap in comparison to the previous missions. ISRO Chairman K Sivan had earlier described the final 15 minutes of Vikram Lander’s descent as “terrifying”. The Vikram lander was designed to execute a soft landing on the lunar surface. The lander had a life on one lunar day, which is equivalent to around 14 earth days.

On September 8, ISRO Chief K Sivan announced that ISRO has found Vikram Lander on the lunar surface. The lander’s location was spotted through a thermal image clicked by the Chandrayaan-2 orbiter’s onboard cameras. According to ISRO, the lander appears intact but it is tilted. ISRO will try to establish its communication link with the lander for the next 14 days.

Though ISRO’s moon landing did not go as planned, ISRO’s efforts and the progress of Chandrayaan-2 and its achievements so far were applauded by other space agencies and leaders from across the world.

NASA tweeted saying, “Space is hard. We commend ISRO’s attempt to land their Chandrayaan 2 mission on the Moon’s South Pole.

ESA Director General Johann-Dietrich Worner applauded ISRO’s great effort and said that he hoped that ISRO’s attempt to communicate with the Vikram Lander will soon be successful.

The UAE space agency assured their full support to ISRO following its loss of contact with Vikram Lander. The space agency also tweeted saying that India has proved to be a strategic player in the space sector. 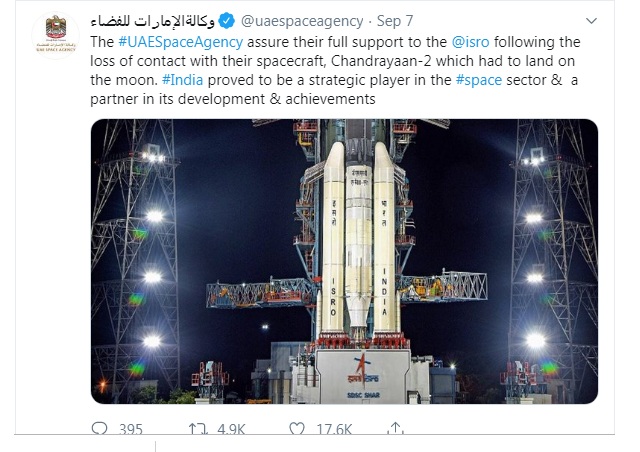 The Australian Space Agency also applauded ISRO’s scientists for their efforts and commitment to continue the journey into space. 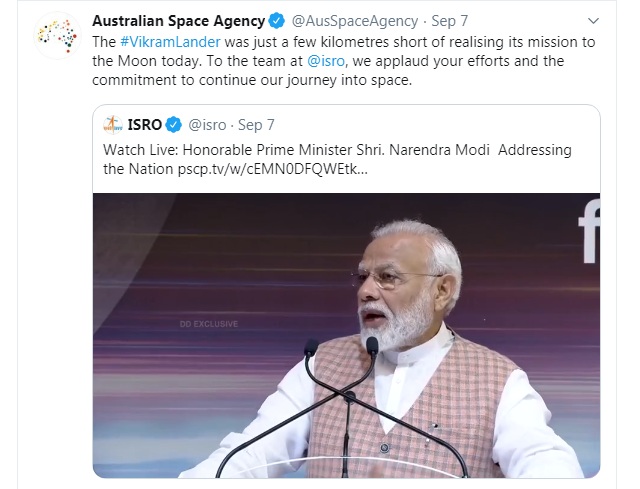 Maldives President Ibrahim Mohamed Solih tweeted saying that India has made history with Chandraayan 2 regardless of the final outcome.

Former President of Sri Lanka Mahinda Rajapaksa also applauded ISRO and PM Modi. Rajapaksa said that the mission was not a failure but a successful step towards reaching the ultimate goal.