The Economic Survey 2019, prepared by CEA Krishnamurthy Subramanian, was tabled in Parliament on July 4. It outlines the blueprint to achieve PM Narendra Modi’s vision of USD 5 trillion Economy.

The Economic Survey 2019, prepared by CEA Krishnamurthy Subramanian, was tabled in Parliament on July 4. The Survey serves as the official economic report of the country and is presented a day before the Union Budget. This first survey of Modi 2.0 Government was tabled by the Union Finance Minister Nirmala Sitharaman and outlines the blueprint to achieve PM Narendra Modi’s vision of USD 5 trillion Economy. The Survey calls for adoption of behavioral economics; it calls for transforming from ‘Beti Bachao Beti Padhao’ to ‘BADLAV’; from ‘Swachh Bharat’ to ‘Sundar Bharat’, among other changes. The Survey has projected the real GDP growth at 7 percent for the year 2019-20, considering the expected pickup in the growth of investment and consumption. Check here the key highlights of the Economic Survey 2018-19. 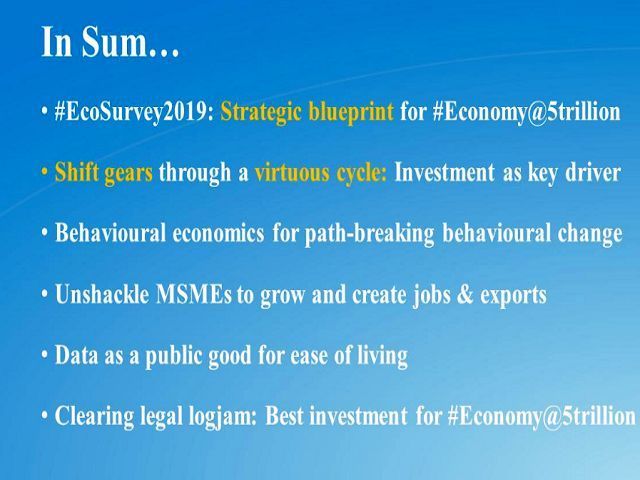 Key Highlights of the Economic Survey 2018-19

• As per the Economic Survey 2019, the pathways for drop opened up in the last five years; and benefits of growth and macroeconomic stability reached to the bottom.
• Sustained real GDP growth rate of 8 percent is needed for a USD 5 trillion economy by 2024-25.
• Virtuous Cycle of savings, investment and exports supported by a favorable demographic phase is required for sustainable growth.
• Private investment is the key driver for demand, capacity, labor productivity, new technology, creative destruction and job creation.
• Survey views the economy as being either in a virtuous or a vicious cycle, and never in equilibrium.

Policy for Real People, Not Robots: Behavioral Economics of “Nudge”

Survey calls to create an aspirational agenda for social change by using insights from behavioral economics. Have a look: 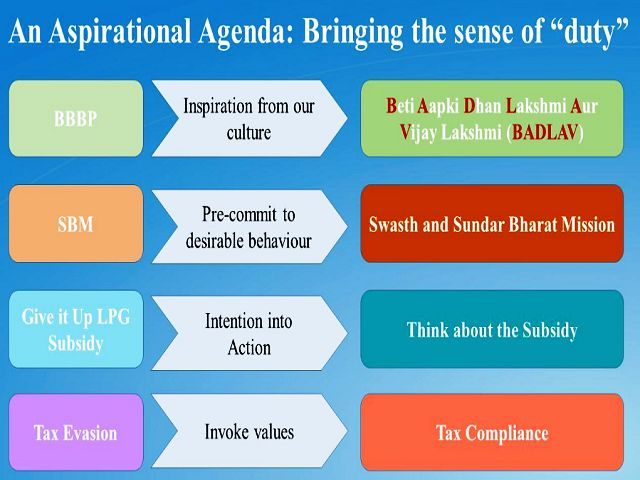 • Here, “Dwarfs” refer to the firms having less than 100 workers despite being over 10 years old. These dwarf firms account for over 50 percent of all organised firms in manufacturing. Their contribution to employment is only 14 percent and just 8 percent to productivity.
• Large firms with more than 100 employees account for 75 percent employment and around 90 percent to productivity. These large MSMEs firms account for just 15 percent of the total organised sector by number.
• Survey throws light upon the growth of the MSME sector for achieving greater profits, boosting job creation and enabling enhanced productivity.
• Survey also focuses on tourism, hotel & catering, transport, real estate, entertainment sectors etc., for job creation.
• It calls for enabling MSMEs to grow by way of:

• At present, society’s consumption of data is at the optimum level, given the technological advances.

• This data is generated by the people; thereby, Government too can create data as public good, ensuring data privacy.

• Government must intervene in creating data for the good of the people, especially for poor and social sectors. 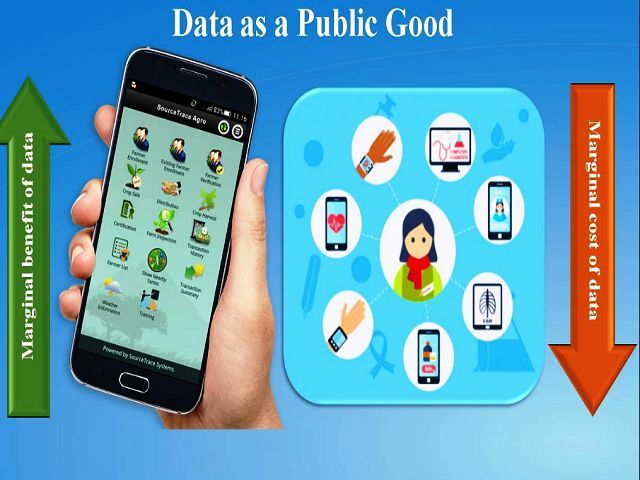 Ending Matsyanyaya: Ways to ramp up the Lower Judiciary to clear backlog

• The Government is facing the biggest hurdles in name of contract enforcement and clearance resolution while working towards the ease of doing business and higher GDP growth in India.

• Around 87.5 percent of the total pending cases are in the District and Subordinate courts.

• 100 percent clearance rate can be achieved by just recruiting to fill in 2279 vacancies in the lower courts and 93 in High Courts.

• The backlog can be cleared with just 25 percent productivity improvements in lower courts, 4 percent in High Courts and 18 percent in Supreme Court.

India has witnessed significant reduction in Economic Policy Uncertainty over the last one decade. Considering that the uncertainty dampens investment growth India for about five quarters, the Survey proposes reduction in economic policy uncertainty by:

From Swachh Bharat to Sundar Bharat via Swasth Bharat

• Now, environmental and water management issues need to be incorporated in the Swachh Bharat Mission (SBM) for sustainable improvements in the long-term.

• India requires 2.5 times increase in per capita energy consumption to increase its real per capita GDP by USD 5000 at 2010 prices to enter the upper-middle income group.

Effective Use of Technology for Welfare Schemes like MGNREGS

• Survey depicts boost in efficiency of MGNREGS with use of technology that has led to significant reduction in delays in the payment of wages with adoption of NeFMS and DBT.

• Demand and supply of work under MGNREGS increased.

• Vulnerable sections such as women, SC and ST workforce increased under MGNREGS during economic distress.

Minimum Wage System to be redesigned for Inclusive Growth

• States will fix the Minimum wages at levels not lower than the ‘floor wage’.

• It proposes ‘National level dashboard’ under the Ministry of Labour & Employment for regular notifications on minimum wages.

• India still holds the top position of the fastest growing major economy in 2018-19.

• Current account deficit was manageable at 2.1 percent of GDP 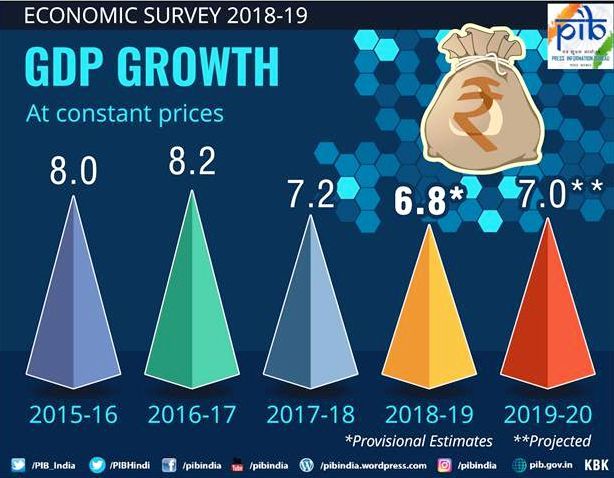 • Banking system improved with the decline in the NPA ratios.

• Insolvency and Bankruptcy Code led to recovery and resolution of significant amount of distressed assets.

• Inflation continued to decline for fifth straight financial year and remained below 4 percent.

• Food inflation based on Consumer Food Price Index (CFPI) also continuing on its declining trend and remained below 2 percent.

• Namami Gange Mission was launched with a budget outlay of Rs 20,000 crore.

• A comprehensive National Clean Air Programme (NCAP) was launched in 2019 for prevention, control and abatement of air pollution.

• 89 percent of groundwater extracted is used for irrigation.

• Building sustainable and resilient infrastructure was given due importance with programmes such as SAUBHAGYA scheme, PMAY etc.

• Services sector contributed more than half of GVA growth in 2018-19.

• The sectors that saw growth were Financial services, real estate and professional services.

• The sectors that saw decline were Hotels, transport, communication and broadcasting services.