Indian men's hockey coach Harendra Singh was on January 9, 2019 sacked from the position and offered the task of helming the junior squad by the national federation.

Explaining the sudden decision, Hockey India said in a statement that though the year 2018 was very disappointing for the Indian Men's Hockey Team with results not going as expected, they believe investing in the junior program will reap long-term benefits.

• Hailing from Chhapra, Bihar, Singh started his career as a halfback playing with IFFCO Tokio in Delhi. In 1988, he joined the Mahindra & Mahindra team in Mumbai on the insistence of former India coach JM Carvalho.

• He switched to Air India in 1990 and later became the company's senior manager.

• Singh made his international debut at the 1990 Asian Games in Beijing, where India won silver.

• He represented the Indian hockey team in 43 matches before retiring at the age of 26 citing too much politics in the game.

• His coaching career began, when he started playing for the French club HC Lyon in 1995 under Coach Tony Fernandes who asked Singh to manage the club's junior side "realising his potential as coach".

• He was awarded the Dronacharya Award in 2012.

• He was appointed as the head coach of the Indian junior team in 2014, and the team won the 2016 Men's Hockey Junior World Cup.

• In September 2017, he was appointed as the head coach of the Indian women's national field hockey team which went on to win the gold medal at the 2017 Women's Hockey Asia Cup. 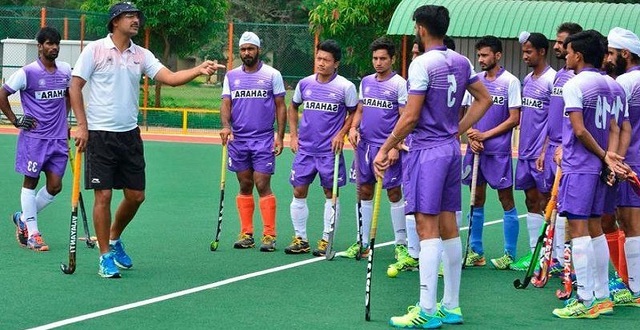 • In May 2018, Singh was named as the head coach of the men's national team, replacing Sjoerd Marijne of the Netherlands who took over the women's team.

• Singh thus became the first Indian to be appointed full time as the men's team head coach since 2008. Prior to this, he had three stints with the team as interim head coach.

• However, in his first assignment in the role, the team won silver at the 2018 Men's Hockey Champions Trophy, losing the final to Australia in penalties.

The decision to reassign Harendra was taken by the HI High Performance and Development Committee on January 7, with an aim to build a "strong base" ahead of the 2021 Junior World Cup and the 2020 and 2024 Olympics.

Hockey India has said that it will be inviting applications for the position of chief coach. The Indian Men's Hockey Team will be returning to training camp in February 2019 for the Sultan Azlan Shah Cup, which is scheduled to commence from March 23, 2019. The name of the new head coach is expected to be announced before that.

In the interim, the team will be overseen by Hockey India High-Performance Director David John and current Analytical Coach, Chris Ciriello.