The Indian Council of Agricultural Research was awarded the first prize for its Tableau, ‘Kisan Gandhi’ in the Republic Day Parade - 2019. The Union Minister of Defence, Nirmala Sitharaman, handed over the award to the ICAR team in New Delhi on January 28, 2019. 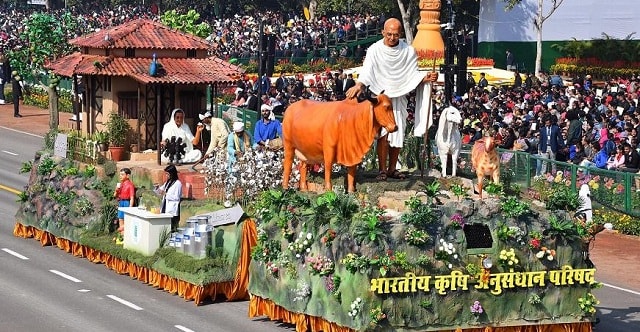 The Indian Council of Agricultural Research (ICAR) was awarded the first prize for its Tableau, ‘Kisan Gandhi’ in the Republic Day Parade - 2019. The Union Minister of Defence, Nirmala Sitharaman, handed over the award to the ICAR team in New Delhi on January 28, 2019.

The ICAR tableau displayed the importance of dairy farming, use of indigenous breeds and livestock based organic agriculture for rural prosperity.

• The ICAR tableau “Kisan Gandhi” portrayed Mahatma Gandhi’s vision to improve agriculture and livestock for the prosperity of rural communities.

• To gain more insight, Gandhi attended a training program on dairy farming for fifteen days in 1927 at Bangalore Centre of the ICAR - National Dairy Research Institute.

• He also visited and appreciated the 'Indore method' of composting at the Institute of Plant Industry, Indore in 1935.

• In the tableau, Gandhi was shown with goats and a cow. Organic agriculture, a revolution in cotton and milk production and food safety analysis for better health were also showcased.

• Kasturba Gandhi was also shown engaged with Charkha and caring for animals at Bapu Kuti at Wardha Ashram. It symbolised livestock based sustainable and climate resilient agriculture.

• In total, 22 tableaux rolled down the Rajpath during the 70th Republic Day Parade including 16 tableaux from states and Union Territories and six from various central ministries and departments. 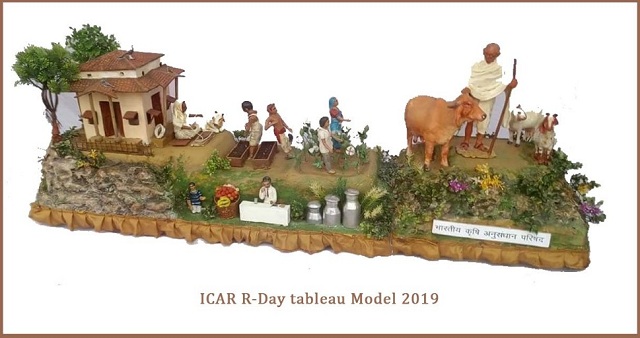 In order to realise Gandhi's dream, the Indian Council of Agricultural Research is relentlessly working towards transforming the Indian Agriculture for ensuring livelihood security and higher income of our Annadata, the farmers.

By developing and deploying cutting edge science and technology, India has succeeded in achieving food self-sufficiency and remains the highest milk and cotton producer in the world.