India and Argentina have released a Joint Statement after extensive talks between Indian Prime Minister Narendra Modi and the President of the Argentine Republic, Mauricio Macri, who is on a state visit to India from February 17-19, 2019.

India and Argentina released a Joint Statement on February 18, 2019 after extensive talks between Indian Prime Minister Narendra Modi and the President of the Argentine Republic, Mauricio Macri, who is on a state visit to India from February 17-19, 2019.

President Mauricio Macri is in India at the invitation of the Prime Minister Narendra Modi, as part of the celebrations of the 70th anniversary of the establishment of diplomatic relations between the Argentine Republic and the Republic of India. The President is accompanied by senior government officials and a business delegation.

During the visit, President Macri met Indian President Ram Nath Kovind, who hosted a banquet in his honor. The President then met Prime Minister Modi, with whom he held official talks in a warm, cordial and friendly atmosphere and exchanged views on bilateral, regional and global issues of mutual interest.

The Prime Minister fondly recalled his visit to Argentina to attend the G20 Leaders Summit in November-December 2018 and commended President Macri's leadership for successfully steering the Summit. The two sides agreed to work closely for a successful G20 Summit in India in 2022, coinciding with the 75th year of India's independence.

They also expressed satisfaction over the successful conclusion of the fifth India-Argentina Joint Commission Meeting, held in New Delhi on January 14, 2019, and reiterated their strong commitment to further deepen and reinvigorate the multifaceted relations between India and Argentina.

Following the talks, ten Memorandums of Understanding (MoUs) were signed between the two nations:

The two leaders reiterated that India-Argentina relations are based on shared principles and values of democracy, freedom, rule of law, respect for human rights and territorial integrity of States.

They expressed their satisfaction at the mutually beneficial cooperation and partnership between the two countries in the political, economic, technical, energy, mining, information technology, scientific and cultural fields.

They noted that new spheres of cooperation in areas of mutual interest have been identified and modalities worked out for further strengthening and expanding the bilateral relationship between the two countries.

They also decided to elevate India-Argentina multi-faceted cooperation to a strategic partnership with focus on key areas for the prosperity of both countries.

The leaders welcomed the signing of the MOU in Defence Cooperation and tasked their relevant ministries to work towards its robust implementation.

The leaders noted the coming into force of the Framework Agreement on Cooperation on the Peaceful Uses of Outer Space in 2018 and the establishment of its joint committee with representatives from respective space agencies.

They also expressed satisfaction over the recent interactions in December 2018 between the two sides to pursue cooperation in the field of satellite remote sensing, including the exchange of data, the development of applications and calibration and validation experiments.

They further agreed to explore avenues of space collaboration including in such areas as satellite building and launch.

The leaders noted with satisfaction the progress in the ongoing cooperation on the Fission Molly Project, the molybdenum plant being built in Mumbai by the Argentine company INVAP, with a target completion in 2020.

The two sides also expressed the desire to enhance and explore cooperative ventures in the areas of nuclear power, other societal uses of nuclear energy in the health, agriculture sectors and for industrial applications and training and capacity building.

They also noted that the MoU signed on the occasion, between the Department of Atomic Energy, India and National Atomic Energy Commission, Argentina for cooperation within the framework of Global Center for Nuclear Energy Partnership would bolster institutional linkages in civil nuclear research and development and capacity building.

The two leaders, while emphasizing on the need to resolutely and unequivocally fight the menace of terrorism, issued a separate Joint Declaration in this regard.

Further, recognising the importance of the services sector in their respective economies, both sides agreed that there was immense potential to increase two-way services trade in tourism, films, health-care and IT among others.

They also agreed to further promote bilateral investments in sectors of mutual interest and to expedite the signing of the Bilateral Investment Treaty and the Double Taxation Avoidance agreement between the two countries.

They also encouraged Indian and Argentine companies to explore partnerships including through the PPP mode.

The two sides highlighted the importance of concluding enabling instruments such as the MOU on cooperation in the field of Medical Products Regulation, which facilitates, the exchange of information on procedures for inspection and registration of pharmaceutical products and efficient communication channels between their counterpart institutions.

The Argentine side underlined that since 2014 India has been included in Annex 2 list of countries of their Presidential decree that has a mechanism to introduce Indian pharmaceutical drugs in Argentine market.

With regard to the same, they welcomed the Technical Cooperation Seminar in Agribusiness, organised from February 15-17, 2019 jointly by the two sides with the participation of officials, researchers and private stakeholders, in order to exchange knowledge, technologies and good practices.

They also agreed to explore the possibilities of third country collaboration in the area of technical cooperation, subject to mutual consent.

The two leaders noted that the conclusion of the work plan on Agro-Industrial cooperation will enhance the scope of agricultural cooperation between India and Argentina, including the exchange of technology to increase productivity, reduce post-harvest losses and build climate resilience.

It would also expedite sanitary and phyto-sanitary approvals of products of mutual interest by the respective regulatory authorities and enhance market access.

The leaders also agreed to continue to work towards expeditious market access in other agricultural products of interest to each other. Argentina expressed interest in oranges, tangerines, grapefruits, grapes, blueberries, nuts, yerba mate and sesame seeds and India in, rice, onion, potato, pomegranate, grapes, banana, mango, poultry and poultry products.

Further, the Argentina authorities informed the Indian side about the usefulness of the multipurpose vaccine "Bío jaja” against the bovine sadness (anaplasmosis and bovine babesiosis), which has been developed by INTA (National Institute of Agricultural Technology, Argentina).

The two sides also agreed to step up exchange and sharing of agriculture mecahnisation technology and resolved to simplify processes for export of such machinery and equipment.

The two sides agreed to explore possibilities of cooperation in the conventional and non-conventional oil and gas resources and in the entire hydrocarbon value chain.

The two sides acknowledged the immense potential for bilateral cooperation in the mining sector.

The Indian side conveyed its objective to have at least 30 per cent of its vehicles run on electrical batteries by 2030.

In this regard, the Argentine side expressed satisfaction that the Indian Joint Venture of three public sector mining companies, Khanij Videsh India Limited (KABIL), had shown interest in the lithium mining in Argentina.

The Argentine side expressed its readiness to facilitate geological information for lithium exploration available in the Geological and Mining Survey of Argentina and coordinate with the Argentine provinces through the Federal Mining Council of Argentina. 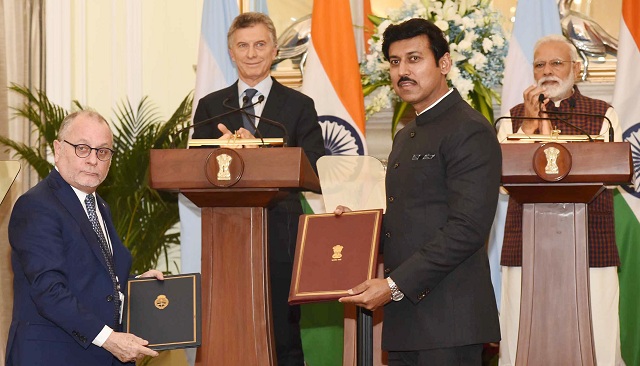 The two leaders emphasised on the importance of efforts towards enhancing the contribution of renewal energy in their energy mix and its contribution to mitigate climate change.

The Argentine side invited Indian companies to participate in its RenovAR renewable energy programme.

Further, India welcomed signature by Argentina of the ISA Framework Agreement noting that the association under ISA would foster cooperation in innovative and cost effective solar technologies.

In order to explore possible ways of facilitating the movement of IT professionals and business persons between the two countries, both sides agreed to expedite the negotiations to conclude a Social Security Agreement at an early date.

The two leaders took note of the progress made towards conclusion of the negotiations for adopting the Cultural Exchange Program for the period 2019-2023.

They welcomed the agreement reached to establish India-Argentina Centre of Excellence for Information and Technologies in Argentina. The Centre will facilitate the transfer of technology to equip labs and the transfer of knowledge, including through the exchange of experts and the development of training courses.

The two sides also welcomed the collaborative MoU being negotiated between Indian Institute of Technology Kanpur and University of Buenos Aires and asked for its early conclusion.

The Indian side informed about the successful Atal IT Tinkering labs in India and then the two sides agreed to make an initial assessment study of the Atal programme as a pilot programme in Argentina.

They also expressed satisfaction over the increasing cooperation through exchanges of students and academics under Indian scholarship programmes and the launch of the Argentine online platform Global Campus, which facilitates scholarship opportunities.

Argentina welcomed Indian participation in this initiative and the inclusion of scholarships for citizens from both countries.

The two sides, while recognizing the importance of air connectivity, agreed to work towards early conclusion of an Air Services Agreement.

Further, they expressed their satisfaction on the signing of the MOU on cooperation in the field of Tourism and India welcomed the inclusion of Indian citizens in the e-visa Argentine System, that allows applying for an online entry authorization for any non-immigrant travel purpose.

The two leaders reaffirmed their commitment to globalisation and reformed multilateralism.

They emphasised on the essential role of the UN in maintaining global peace and security, promoting economic and social advancement and dealing with global threats and challenges.

They reiterated their commitment to intensify their dialogue in the United Nations and other multilateral organissations to address current global challenges such as climate change and to foster international and regional peace and security, as well as sustainable development.

The two sides reaffirmed the importance of the rules-based, open, transparent, inclusive, non-discriminatory and equitable multilateral trading system with the World Trade Organisation at its center. They recognised the urgent need to discuss ways and means to adapt the WTO to face current and future challenges and stressed the need to strengthen, reform and modernise the WTO in order to strengthen the dispute settlement mechanism of the WTO.

The two leaders reaffirmed the need for a comprehensive reform of the UN Security Council, including its expansion to make it more representative, accountable, effective, and reflective of the geopolitical realities of the 21st century.

As a host of BAPA 40, Argentina hopes both countries can join efforts throughout the negotiation process, to reach a consensus in the outcome document that reflects South- South Cooperation opportunities within the framework of the 2030 Agenda implementation.