India and Australia have signed five agreements to boost investments and enhance cooperation in areas including services to the disabled, bilateral investment, scientific collaboration and agricultural research and education.

India and Australia on November 22, 2018 signed five agreements to boost investments and enhance cooperation in areas including services to the disabled, bilateral investment, scientific collaboration and agricultural research and education.

The agreements were signed during the talks held between Indian President Ram Nath Kovind and Australian Prime Minister Scott Morrison in Sidney, Australia. The Indian President has become the first-ever Indian head of state to visit Australia. He arrived in the country on November 21, as a part of the second leg of his two-nation trip.

The following are the five pacts:

2. Agreement between Invest India and Austrade to facilitate bilateral investment.

3. Agreement between the Central Mine Planning and Design Institute, based in Ranchi and the Commonwealth Scientific and Research Organisation, based in Canberra, to foster scientific collaboration and innovation.

4. Agreement between the Acharya NG Ranga Agricultural University, Guntur and the University of Western Australia, Perth, for cooperation in agricultural research and education.

5. Joint Ph.D. agreement between the Indraprastha Institute of Information Technology, Delhi and the Queensland University of Technology, Brisbane.

The agreements were exchanged by High Commissioners of both the countries, in the presence of Marise Payne, Foreign Minister of Australia and Anantkumar Hegde, Minister of State for Skill Development and Entrepreneurship. 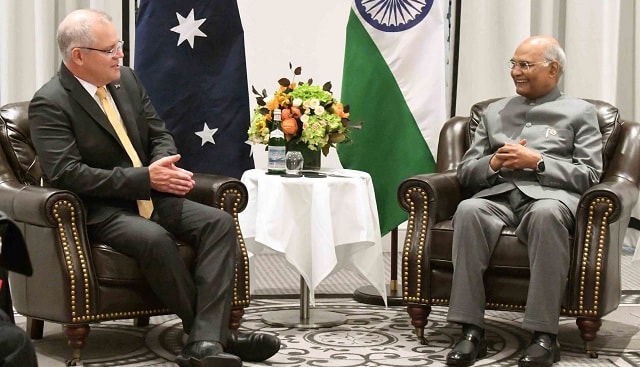