India and France expressed their desire to deepen their space cooperation to meet new challenges in space exploration together.

India and France released a joint statement on August 22, 2019 after detailed talks between Indian Prime Minister Narendra Modi and the President of France, Emmanuel Macron.

PM Modi is on an official state visit to France at the invitation of the French President for a bilateral summit on August 22-23 in Paris and to participate in the G7 Summit on August 25-26 in Biarritz. During the talks, both the leaders discussed their bilateral relations and ways to open new areas of cooperation.

Following the talks, four Memorandum of Understanding (MoUs) were signed between the two nations: 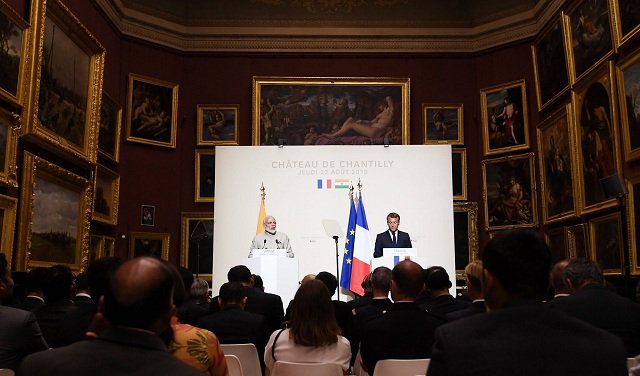 Indian PM Narendra Modi and French President Emmanuel Macron noted that there has been positive progress in the development of bilateral trade and economic relations between the two countries. The nations also reaffirmed that the India-France Administrative Economic and Trade Committee (AETC) provides an appropriate framework to assess and find ways to further promote the bilateral trade and investment as well as to speed up the resolution of market access issues to the benefit of economic operators.

The two leaders decided to further jointly strengthen work on solving trade and investment issues of concern for both French and Indian companies, including by additional ways and mechanisms.

The two leaders jointly agreed that the high-level France-India economic and financial dialogue should be reactivated as quickly as possible.

India and France expressed their desire to deepen their space cooperation to meet new challenges in space exploration together, whether it concerns planetary exploration or human spaceflight.

Both PM Modi and Emmanuel Macron welcomed the decision to train medical support personnel for Indian astronauts, who will be part of India’s manned space mission by 2022. The training will be carried out both in France and in India.

The leaders further welcomed the signing of an Implementing Arrangement for the establishment of a framework for the realization of joint maritime domain awareness mission. They also welcomed the launch of a Space Climate Observatory that further enhances Indo-French cooperation on combating climate change, besides TRISHNA joint mission and accommodating Argos in Oceansat 3.

The two nations also resolved to act together at the international level to promote norms and best practices necessary for guaranteeing the safety of space missions.

The two leaders adopted cybersecurity and digital technology road map aimed at expanding Indo-French bilateral cooperation, particularly in the strategic sectors of high-performance computing and Artificial Intelligence, with the target of bringing the start-up ecosystems in both the nations closer to each other.

They further welcomed the signing of the Cooperation Agreement between the Centre for Development of Advanced Computing and Atos aiming at developing the cooperation in the fields of quantum computing, Artificial Intelligence and exascale supercomputing.

PM Modi and Emmanuel Macron expressed satisfaction at the progress in negotiations between NPCIL and EDF since the conclusion of the Industrial Way Forward Agreement between the two parties in 2018 for the construction of six nuclear power reactors in India in Jaitapur, Maharashtra.

The leaders also noted that discussions are underway on the Techno-Commercial Offer and the financing of the project as well as on how to increase localization through manufacturing in India and enhance common understanding on the CLND Act between the two sides.

Both the nations reaffirmed that they were resolved to actively pursue discussions for their early conclusion. They also welcomed the extension of the MoU between the Department of Atomic Energy (DAE) and the French Alternative Energies and Atomic Energy Commission (CEA) concerning cooperation with the Global Centre for Nuclear Energy Partnership (GCNEP) in January 2019 for another five years, the signing of the Implementing Agreement between the Bhabha Atomic Research Centre (BARC) and the CEA on the safety of Light Water Reactors (LWR) in September 2018.

India and France determined to further strengthen the cooperation between their armed forces and in this connection are working towards increased interoperability as well as pursuing deliberations to develop joint forces cooperation. They welcomed the signing of an agreement regarding the Provision of Reciprocal Logistics Support.

Defence industrial cooperation has been one of the mainstays of the strategic partnership between India and France. Both PM Modi and the French President commended the progress made in the implementation of agreements signed previously, particularly the delivery of the first Rafale fighter jet earlier this year.

The two leaders reaffirmed their commitment to further strengthen cooperation in defence industry field and extended their support to existing and upcoming partnerships between the defence companies of the two countries in the spirit of "Make in India” and for the mutual benefit of both countries.

The two sides noted with satisfaction that Indian MSMEs are increasingly becoming part of global supply chains of French Defence and Aerospace OEMs and reaffirmed to give further impetus to this trend. They also welcomed the ongoing collaboration between aerospace and defence industrial associations of both countries, SIDM for India and GIFAS for France.

PM Modi and France’s Emmanuel Macron agreed to significantly enhance people-to-people contacts and cultural exchanges. The two leaders agreed to set up a regular dialogue on consular matters, which will facilitate exchange and mobility. Overall, around 700 000 Indian tourists visited France in 2018, which 17 percent more than in 2017 and more than 250,000 French tourists visited India in the same year.

The two leaders decided that India will be the Country of Honour for the 2020 edition of Livre Paris, the Paris international book fair and the National Gallery of Modern Art in Delhi will hold the first exhibition in India of French artist Gérard Garouste in January 2020, while the Musée national d’art moderne (Centre Georges Pompidou) will hold a dedicated exhibition of the works of Indian artist Sayed Haider Raza in 2021.

Further, India will organise Namasté France, in 2021-2022 and the two countries will adopt a Plan of Action by the end of 2019 aimed at enhancing co-produced projects, distribution, and training in the fields of cinema, video games and virtual reality. France and India agreed to cooperate shooting of films in both countries. 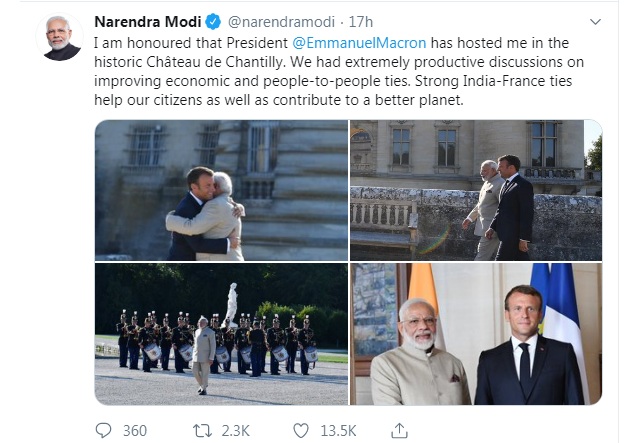 The two nations expressed satisfaction on the status of student mobility between the two countries, which has been aided by the teaching of French in India and the creation of the network of schools for Excellence in French.

The student exchange target of 10,000 set in 2018 is expected to be fulfilled this year itself and therefore both sides decided to enhance the target to 20,000 students by 2025.

The two leaders further welcomed the holding of the Second Knowledge Summit in Lyon, France, in October 2019. This summit is expected to help structure academic and scientific partnerships with corporate entities on crucial issues, such as aerospace, renewable energy, green chemistry, smart cities, agriculture, marine sciences, and Artificial Intelligence.

India and France signed a Memorandum of Understanding to enhance cooperation on Skill Development.

The two nations reaffirmed their shared commitment to effectively combat climate change and loss of biodiversity.

Further, acknowledging the need for multi-level action – local, national, regional and global – France and India urged all stakeholders to contribute to the success of the Climate Action Summit convened by the United Nations Secretary-General on 23rd September 2019 and to encourage the global efforts towards combating climate change.

The two leaders reaffirmed their commitment to update their nationally determined contributions in line with principles of United Nations Framework Conventions on Climate Change (UNFCCC) and the Paris Agreement including equity and Common but Differentiated Responsibilities and Respective Capabilities (CBDR-RC).

India and France reaffirmed their joint commitment to accelerate the development and deployment of renewable energy. They also welcomed the progress made by the International Solar Alliance in capacity building and sharing of best practices to harness solar energy among the member nations.

Further, both the countries appreciated the implementation of Payment Security Mechanism (PSM) by Solar Energy Corporation of India (SECI) and welcomed the progress achieved by the World Bank and the French Development Agency in Solar Risk Mitigation Initiative (SRMI) projects for enhancing investors’ confidence.

The two leaders also welcomed the signing of an agreement between NISE and CEA in the field of hydrogen energy and decided to further deepen their technological cooperation in the field of renewable energy.

The two leaders reiterated their strong condemnation of terrorism in all its forms and manifestations including cross-border terrorism and terror-related incidents in France and India. Both leaders reaffirmed that terrorism cannot be justified on any grounds whatsoever and it should not be associated with any religion, creed, nationality and ethnicity.

The leaders also reaffirmed their strong determination to eliminate terrorism wherever it is to be found and urged the international community to strengthen the efforts to counter and prevent terrorist financing. They called upon all UN member countries to implement the UNSC Resolution 2462 on Fighting Terrorist Financing adopted last March 28.

They also called upon all countries to work together for rooting out terrorist safe havens and infrastructure, disrupting terrorist networks and their financing channels, and halting cross-border movement of terrorists belonging to Al Qaeda, Daesh/ISIS, Jaish-e-Mohammed, Hizbul Mujahideen, Lashkar-e-Tayabba, and their affiliates as well as terrorist groups threatening peace and security in South Asia and the Sahel region.

India and France welcomed the swift implementation of the conclusions of the Joint Strategic Vision of India-France Cooperation in the Indian Ocean Region, adopted during the State Visit to India of President Macron in March 2018.

For the implementation of the White Shipping agreement, India and France welcome the appointment of a French liaison officer at the Information Fusion Centre – Indian Ocean Region (IFC-IOR) in Gurugram. The two nations further intend to coordinate their action at the Indian Ocean Rim Association (IORA) and undertake, along with interested states, a joint project for reinforcing assets for combatting piracy and all kinds of maritime trafficking in the Southern Indian Ocean.

France also intends to work concertedly with India at the Indian Ocean Naval Symposium (IONS), over which it will preside from 2020 to 2022.

India and France jointly call for reform of the United Nations Security Council that would enable India to gain a permanent seat on it.

They also reaffirmed their commitment to working expeditiously and constructively, together and with others towards the modernisation of the World Trade Organization, including in the lead-up to the 12th Ministerial Conference in June 2020.

Further, the two nations reaffirmed their determination to deepen the relations between the EU and India on strategic and multilateral issues as well as in trade, investment and innovation.