India and Norway released a Joint Statement on January 8, 2019 after extensive talks between Indian Prime Minister Narendra Modi and Norwegian PM Erna Solberg, during the latter’s official state visit to India from January 7-9, 2019.

The Prime Minister of the Kingdom of Norway paid a state visit to India at the invitation of PM Modi. She was accompanied by a high-level delegation comprising state secretaries, senior officials and business leaders. 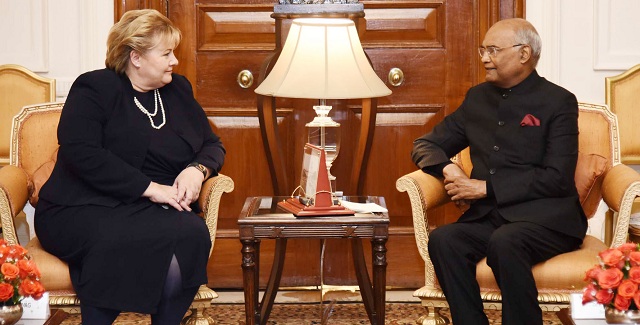 Following the talks, one Memorandum of Understanding (MoU) was signed between the two nations: 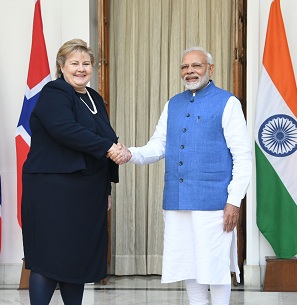 The two Prime Ministers held wide-ranging discussions on bilateral, regional and multilateral issues, and on the ways and means to further strengthen the growing bilateral partnership.

The two sides expressed the desire to maintain high-level exchanges and enhancing cooperation through the existing mechanisms of bilateral interaction.

The two leaders reaffirmed their commitment to expand bilateral trade in order to realise its full potential.

They noted with satisfaction the signing of the Terms of Reference for the establishment of the Dialogue on Trade and Investment, which would give impetus to business cooperation and encourage participation of Norwegian companies in the flagship programmes of India.

Further, recognising that all countries benefit from open and predictable trade rules, the leaders acknowledged that a conclusion of the free trade negotiations between EFTA and India is a priority for both the Governments.

They acknowledged that a free trade agreement would ensure increased predictability and give the countries' companies a solid foundation for doing business.

Infrastructure and other areas

The two leaders discussed the importance of robust infrastructure and Prime Minister Solberg noted with interest India’s new initiative of the Coalition for Disaster-Resilient Infrastructure, which aims to offer risk analysis and capacity building support to disaster-prone countries.

The two leaders applauded the commendable achievements in maternal and child health care through the Norway-India Partnership Initiative (NIPI) and desired to expand its scope.

The Prime Ministers noted the importance of sustainable use of the oceans, including for food security, energy sources, mineral exploration and climate-friendly maritime transport.

They further, welcomed the signing of the MoU on India-Norway Ocean Dialogue and the establishment of the Joint Task Force on Blue Economy under the aegis of the MoU, in order to promote multi-sectoral cooperation in various aspects of Blue Economy. 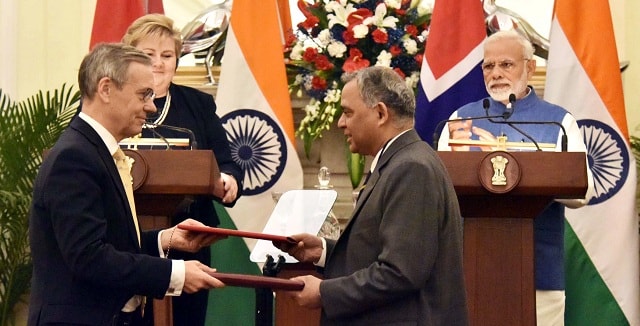 The two leaders recognised that Climate Change is a global challenge with strong economic, environmental and social dimensions.

In order to mitigate the challenges, the two sides agreed for collaboration and joint research in this sector and India invited Norway to participate in the International Solar Alliance.

The two leaders expressed the desire to work together for realising Sustainable Development Goals including poverty, health, education, women’s empowerment, clean energy and sustainable use of ocean resources.

The two sides emphasised the central role of the UN in maintaining global peace and security and recognised the value of each other’s contribution to this important work.

They also stressed on the need for the reform of the UN including of the UN Security Council and its expansion in both permanent and non-permanent seats to make it more representative, accountable, effective and responsive to the realities of the 21st century.

Norway agreed that India is a strong candidate for a permanent seat in a reformed Security Council expanded with both permanent and non-permanent members.

India expressed its appreciation for Norway’s support towards India’s accession to the Missile Technology Control Regime (MTCR), the Wassenaar Arrangement (WA) and the Australia Group (AG).

Norway supported India's application for membership of the Nuclear Suppliers’ Group and reaffirmed its commitment to work constructively within the Group with the aim of reaching a positive outcome regarding Indian membership at the earliest opportunity. 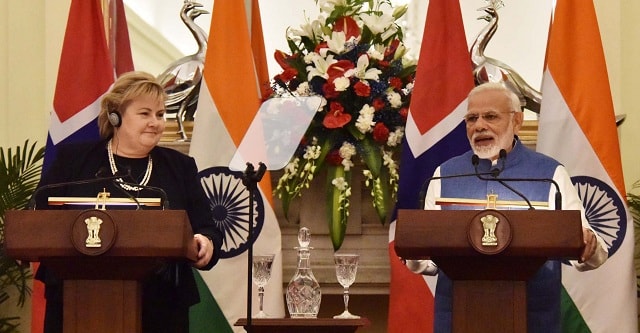 The two leaders strongly condemned terrorism in all its forms and manifestations and agreed to cooperate in combating international terrorism. They also urged the international community to work towards early finalization of the Comprehensive Convention on International Terrorism mooted by India at the UN.

Further, the two sides emphasised on the significance of further strengthening cultural ties through regular exchange and exposure to each other’s culture.

The dates of the visit will be decided through diplomatic channels.