India and the UAE have signed two agreements, including one on currency swap during Indian External Affairs Minister Sushma Swaraj’s visit to Abu Dhabi for the 12th India-UAE Joint Commission Meeting. The agreement on currency swap between the countries will allow trading in their own currency.

The 12th session of the India-UAE Joint Commission Meeting (JCM) for Economic and Technical Cooperation was held on December 3-4, 2018 in Abu Dhabi, the United Arab Emirates.

The Indian delegation was led by Indian External Affairs Minister Sushma Swaraj. During the visit, Swaraj held long discussions with her counterpart Abdullah bin Zayed to step up bilateral cooperation in areas such as security, defence, counter-terrorism, investments, space, trade and energy.

• During the India-UAE JCM, India and the United Arab Emirates signed two agreements, one pact on currency swap and an MoU for development cooperation in Africa.

• The agreement on currency swap between the countries will allow trading in their own currency and payments to import and export trade at a pre-determined exchange rate without bringing in a third benchmark currency like the US dollars.

• The second Memorandum of Understanding would enable both the nations to undertake development projects in Africa.

• Besides, the leaders of the two nations discussed several areas of mutual interests including defence, security, counter-terrorism, trade, economic, energy, science and technology and civil aviation.

• The leaders also identified several new areas of cooperation and following the conclusion of the JCM, the leaders signed and adopted the agreed minutes of the meeting. 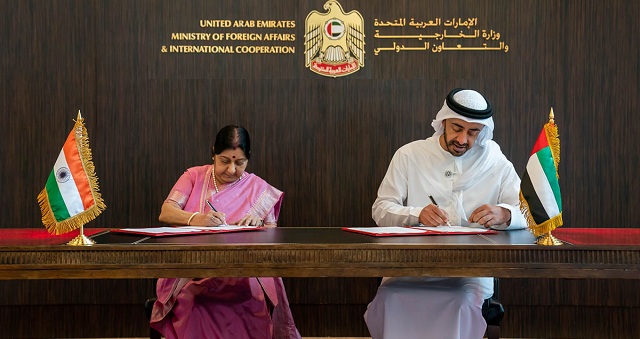 • The Crown Prince stressed the importance that both nations attached to the values of peace and tolerance. He further, expressed his desire to do more with India in future to achieve the full potential.

• Further, Swaraj along with her UAE counterpart Abdullah jointly inaugurated a digital interactive museum showcasing the life, works and philosophy of Mahatma Gandhi and the founder of modern UAE Shaikh Zayed.

• The Gandhi-Zayed Digital Museum, which will promote peace, tolerance and sustainability, is part of the celebrations by the two countries to mark the 150th birth anniversary of Mahatma Gandhi and centenary celebrations of the birth of Shaikh Zayed.

With bilateral trade amounting to almost USD 50 billion, India and UAE are one of the largest trade partners for each other and have made robust investments bilaterally.

The UAE is the sixth-largest source of Indian oil imports and hosts a 3.3 million-strong Indian community, which amounts to the largest number of Indians outside India.

Indians also make up the largest ethnic group in the UAE making up roughly 27 per cent of the total UAE`s residents.

During the Indian PM Narendra Modi's visit to the UAE in February 2018, both sides set an ambitious target of US$100 billion in bilateral trade by the year 2020.