India and the US have expanded defence cooperation with defence deals worth USD 3 billion. 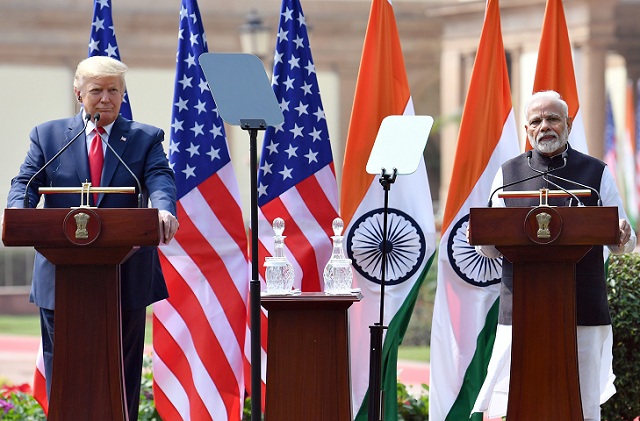 India and the United States finalised defence deals worth $3 billion on February 25, 2020. The deals were signed after delegation-level talks between Indian Prime Minister Narendra Modi and visiting US President Donald Trump. The deals are expected to enhance the joint defence capabilities between the two countries.

The US President made the announcement in a joint statement with PM Modi on Day 2 of his maiden visit to India. Donald Trump said that India has agreed to purchase USD 3 billion worth advanced American military equipment including Apache and MH-60 Romeo helicopters, which are the finest in the world.

Trump also stated that the US makes the greatest weapons ever made including planes, ships, missiles, rockets, air defence systems, armed and unarmed aerial vehicles and that the nation is now looking forward to providing India with some of its best and most feared military equipment.

India and the US finalised two key defence deals on February 25. The deals are as follows:

2. Procurement of six AH-64E Apache helicopters at a cost of $800 million.

Prime Minister Narendra Modi announced that the two countries have decided to take their ties to a comprehensive global partnership level. US President Donald Trump also announced during the joint press conference that the focus of both the nations was on having a comprehensive trade deal. He said that the relations between the two nations have never been as good as they are now. He revealed that the two nations are working towards finalizing a wonderful trade deal.

Trump stated that teams from both nations have made tremendous progress towards finalising a comprehensive trade agreement and that he is optimistic that they can reach a deal of great importance to both countries.

The Cabinet Committee on Security (CCS) had given its approval to the acquisition of the American helicopters just days ahead of Trump's visit. The choppers are designed for hunting submarines and conducting search and rescue operations at sea.

The United States had approved the sale of Apache and MH-60 Romeo helicopters in April 2019 under its Foreign Military Sales (FMS) programme.

The helicopters built by Lockheed Martin will replace India's old fleet of British-made Sea King choppers. The MH-60 Romeo choppers will be acquired by the Indian Navy after several failed attempts to replace their aging Sea King fleet.

This is not the first time India has shown interest in buying the choppers. But last time the deal was cancelled after the Union Defence Ministry and America's Sikorsky Aircraft failed to come to an agreement on the price of the choppers.