ISRO to launch Cartosat-3, 13 commercial nano satellites from US

The Cartosat-3 satellite is an advanced earth observation satellite, which has a high-resolution imaging capability.

Indian Space Research Organisation (ISRO) is going to launch Cartosat-3 along with 13 commercial nanosatellites aboard PSLV-C47 into the Sun Synchronous orbit on November 25, 2019.

The satellite will be launched from the Satish Dhawan Space Centre in Sriharikota, Andhra Pradesh. The tentative time of the launch is 09: 28 Hrs IST on November 25 subject to weather conditions.

Cartosat-3 is an advanced, high-resolution earth observation and imaging satellite. The 13 commercial nano satellites are from the United States. 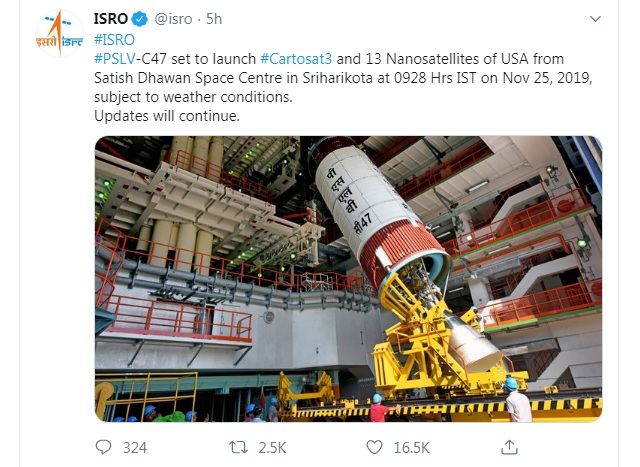 The Cartosat-3 satellite is a third-generation agile advanced satellite, which has a high-resolution imaging capability. After the launch, the satellite will be placed in an orbit, which will be 509 km from the Earth.

ISRO is launching the earth observation satellite, Cartosat-3, to boost the country’s border security by stationing “more eyes in the sky”.

This will be the 74th launch vehicle mission from the Satish Dhawan Space Centre in Sriharikota.

The launch vehicle will be carrying the Earth-imaging satellite Cartosat-3 as the primary payload and 13 commercial nanosatellites from the US.

The American satellites have been included in the mission as a part of a commercial deal with NewSpace India Limited (NSIL), Department of Space.

After Cartosat-3, ISRO will be launching two more surveillance satellites— Risat-2BR1 and Risat-2BR2 aboard PSLVC48 and C49 rocket from Sriharikota in December 2019.

The launches of operational satellites come almost six months after the previous launches, due to the launch of Chandrayaan-2 mission.