Jharkhand Exit Poll Results 2019 LIVE Updates: Jharkhand exit poll results 2019 project a hung assembly with the opposition making large gains. The incumbent CM Raghubar Das-led BJP government in the state is projected to lose its majority. The Chief Minister's seat itself is predicted to be on the edge this time. The BJP or the JMM may emerge as the single largest party in Jharkhand, as per the pollsters.

The fifth and the final phase of polling concluded on December 20, 2019. While Axis My India and IANS-CVoter published its results on the same day, Jan Ki Baat revealed its numbers on December 21, 2019.

The final tally for Jharkhand Exit Poll 2019 as per IANS-CVoter is as follows:

Sudesh Mahto-led AJSU, which was earlier part of the out-going NDA government decided to move away from the saffron party due to differences over seat sharing. However, with the BJP falling short of majority, Sudesh Mahto may turn out to be the King Maker in the tribal state. IANS-CVoter has predicted AJSU to win 3 - 7 to seats in the state.

As per the initial numbers from IANS-CVoter, smaller parties may end up playing king-maker in the tribal state. As per the exit poll predictions, AJSU is likely to get 3 to 7 seats while Jharkhand Vikas Morcha (JVM) led by Babulal Marandi is likely to secure 1 to 4 seats.

The ruling BJP is likely to fall short of a majority in Jharkhand as per the IANS-CVoter. IANS-CVoter Exit Poll predicts that the saffron party will secure 28 to 36 seats in the Jharkhand Assembly. It would be interesting to see if Jharkhand will see a replay of Haryana Assembly Results or will JMM-Cong-RJD play spoilsport? Stay tuned for more updates.

IANS-CVoter predicts Jharkhand Headed for a HUNG Assembly. Initial numbers shared by the pollster predicts 31 to 39 seats for JMM-Cong-RDJ Alliance of the total 81 seats in the state assembly. Stay tuned for BJP numbers.

Live Update @ 7:05 PM: Meanwhile, Axis My India Jharkhand Exit Polls Results 2019 numbers will start following in soon.  As per the latest update, Axis My India conducted face-to-face interviews with 12,489 voters, which comprised of 76 per cent men and 24 per cent women. Axis My India Exit Poll has been compiled based on the representative sampling methodology across demography and geography of 81 assembly seats in Jharkhand.

Live Update @ 6:55 PM: First numbers coming in for Jharkhand Exit Poll 2019 from IANS-CVoter. The exit poll predicts a hung assembly in Jharkhand with no clear majority for either BJP or Congress– JMM – RJD alliance. Detailed numbers to follow soon.

Live update @ 6: 45 PM: The exit poll numbers are expected to be released soon.

Live update @ 6:25 PM: The exit polls will be released shortly. The Election Commission had prohibited the release of exit polls between 7 am on November 30 and 5.30 pm on December 20, 2019. The exit polls are being conducted by independent pollsters such as Axis My India, C-voter and Jan Ki Baat.

Live update @ 6:20 PM: The fifth phase of polling in Jharkhand ended at 3 pm in 5 constituencies- Litipara, Barhait, Sikaripara, Maheshpur and Borio and for the remaining, it concluded at 5 pm.The polling had begun at 7 am for 16 constituencies across the state.

According to official Election Commission data, about 68.99 percent polling was recorded till 5 pm. The Jharkhand assembly elections were conducted in five phases for the total 81 seats due to the large Maoist presence in majority of the constituencies. 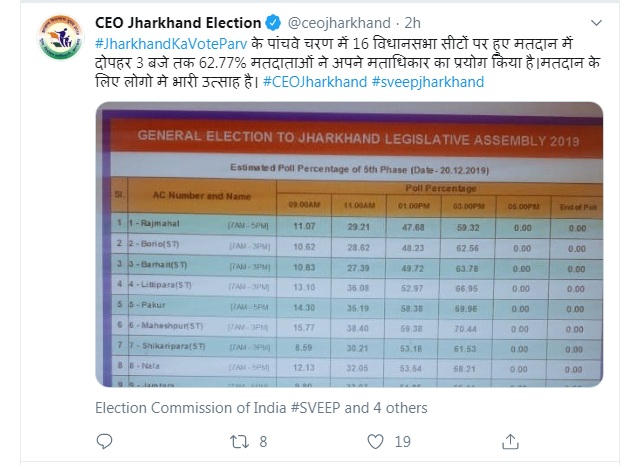