Kanchan Chaudhary Bhattacharya took a plunge into politics after retirement by contesting the 2014 Lok Sabha election.

She took a plunge into politics after retirement by contesting the 2014 Lok Sabha election. She contested Lok Sabha elections on an Aam Aadmi Party's ticket from Haridwar constituency. Delhi’s Chief Minister Arvind Kejriwal in a Twitter post remembered Kanchan Bhattacharya, “Saddened to know about the passing away of the country's first woman DGP Ms Kanchan Chaudhary Bhattacharya. She remained active in public life after her retirement and wanted to serve the country until her very last. Will miss her. RIP” 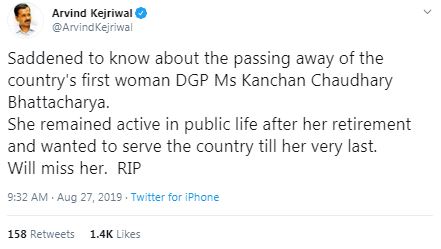 • Kanchan Chaudhary Bhattacharya was the second woman IPS officer in the country after Kiran Bedi. She completed her PG degree in English Literature from IP College, Delhi University.
• She was appointed as first women Deputy General Inspector of Police in Uttar Pradesh. Later, she was promoted to the first women IG of UP Police.
• She had 33 years of career span and handled various sensitive cases like Syed Modi muder case in 1987 and Reliance-Bombay Dyeing case.
• She was awarded with President's Medal for long and meritorious services in 1989 and Rajiv Gandhi Award in 2004 for excellent all round performance and as an outstanding woman achiever. 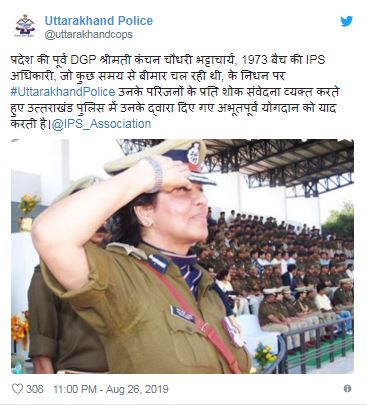