How to vote in Uttar Pradesh: Lok Sabha Elections 2019

In the fifth phase of polls, the polling has begun in 14 parliamentary constituencies in UP including Lucknow, Raibarely, Amethi, Sitapur, Kaushambi, Gonda, Banda, Fatehpur, Faizabad, Mohanlalganj, Kaiserganj, Daurahra, Barabanki and Behraich. 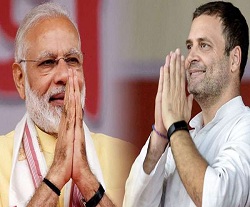 How to vote in Uttar Pradesh?

The fifth phase of Lok Sabha Elections 2019 has begun in India, with a total 51 parliamentary constituencies in the fray across 7 states. Overall, voting is taking place for 14 seats in Uttar Pradesh, 12 in Rajasthan, 7 each in Madhya Pradesh and West Bengal, 5 in Bihar and 4 in Jharkhand. In Jammu and Kashmir, polling is underway in Pulwama and Shopian districts of Anantnag and Ladakh constituencies.

While 22 states and Union Territories will see single-phase polling in the Lok Sabha Elections 2019, Bihar, Uttar Pradesh and West Bengal will see polling in all seven phases. Among all the states in India, UP sends maximum 80 MPs to the Lok Sabha. Considering its huge population and vast geographical area, the Election Commission decided to hold elections in the state in each of the seven phases.

• The polling will decide the fate of a total of 182 candidates including key candidates such as Union Ministers Rajnath Singh, Smriti Irani, UPA Chairperson Sonia Gandhi and Congress President Rahul Gandhi.

• The state is primarily seeing a triangular contest between the BJP, Congress and the SP-BSP. In the 2014 Lok Sabha elections, barring Amethi and Raibareli, the BJP had registered wins on rest of the 12 seats.

• Under the seat-sharing arrangement between BSP and SP in the fifth phase, the BSP has fielded five candidates from the constituencies of Sitapur, Mohanlalganj, Fatehpur, Kaiserganj and Daurahra while the SP has fielded seven candidates from Lucknow, Banda, Kaushambi, Barabanki, Faizabad, Bahraich and Gonda.

• On the other hand, the Congress has fielded its candidates from all parliamentary constituencies.

• The polling will be held between 7am to 6 pm. The EC has said all the adequate security arrangement would be done to ensure a smooth polling process.

Mohanlalganj: In this seat, sitting BJP MP Kaushal Kishore is seeking a second term. His main contestant is CL Verma from the BSP. The Congress has fielded RK Chaudhary from the seat.

Lucknow: In this seat, Union Minister Rajnath Singh is seeking another term. Former BJP MP and actor Shatrughan Sinha's wife Poonam Sinha has been fielded from the seat as the SP-BSP joint candidate, while the Congress has fielded Acharya Pramod Krishnam.

Rae Bareli:  In this seat, which is one of the country's most high-profile constituencies, the BJP has fielded Congress turncoat Dinesh Pratap Singh to take on UPA Chairperson and four-time MP Sonia Gandhi. The SP-BSP alliance has not fielded any candidate from the seat.

Amethi: The traditionally safe seat of the Indian National Congress is going to see a tough two-way competition between the Congress and the BJP in the current polls. Congress President and sitting MP Rahul Gandhi has been once again challenged by Union Minister Smriti Irani. Gandhi has been representing the seat since 2004. Before him, it was represented by his mother Sonia Gandhi and father Rajiv Gandhi. The SP-BSP alliance has not fielded a candidate from the seat.

Kaushambi: In this seat, BJP's sitting MP Vinod Kumar Sonkar is facing a tough fight from SP-BSP joint candidate Indrajeet Saroj. The Congress has fielded Girish Pasi from the seat.

Bahraich: In this seat, the sitting BJP MP Savitri Bai Phule recently quit the party and joined the Congress. She is up against SP-BSP joint candidate Shabbir Balmiki and BJP's new candidate Akshaibar Lal.

The state is primarily seeing a triangular contest between the BJP, Congress and the SP-BSP.